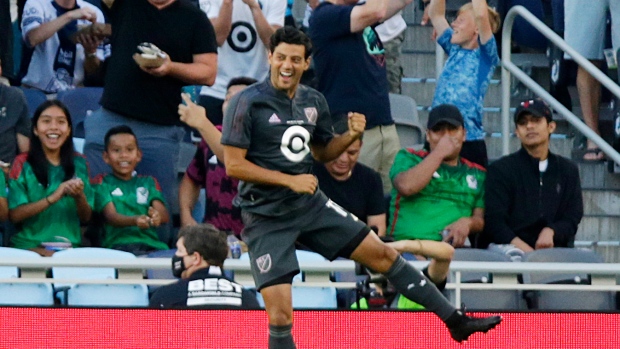 Coach Adrian Heath said slyly, “What did you win?”

Carlos Vela scored in the third minute and Raúl Ruidíaz converted a penalty kick in the 73rd minute in the Major League Soccer All-Star team's 2-1 victory over Mexico's Liga MX on Wednesday night.

Vela, the versatile Los Angeles FC forward who led MLS with 34 goals in 2019, headed in the early goal off a crossing pass by LAFC teammate Diego Palacios. Ruidíaz padded the lead after Carles Gil drew a penalty, sending his free shot to the lower right corner to elicit a roar from the sellout crowd of 19,797 at Allianz Field.

Kevin Álvarez scored for Liga MX with a rocket from outside the box in the 83rd minute that sailed past diving goalie Sean Johnson. That brought the thousands of Mexicans in attendance to life, and they were just as loud as the Americans, but the work done in the net by Andre Blake and St. Clair over the first two-thirds of the game paid off.

St. Clair entered in the 32nd minute to sub for Andre Blake and made four saves, including a diving stop to block a header in the 44th minute. Liga MX had a 7-2 edge in shots on target, took seven corners to one for MLS and had a 52% possession rate, so the goalkeeping

“I was definitely a little bit surprised," St. Clair said. “Normally it’s the guys who contribute to the goals who get the award, but I'm definitely very happy.”

Minnesota United, nicknamed the Loons by the club's ardent supporters, had Heath, St. Clair and starting midfielder Emanuel Reynoso represented on the team.

“Truly an honor to be able to have a performance like this in front of the fans that support us every week,” said St. Clair, who is tied for second in MLS with 79 saves in 22 games. “I always knew I was capable of putting forth these performances on this stage.”

Other Canadians have made their mark in the All-Star game, now in its 26th edition. Dwayne De Rosario was named MVP in 2006.

Miller did his part on offense, hammering a shot just high in the 17th minute. The native of Scarborough, Ont., was also in the right spot in the 31st minute when he got in the way of Fernando Beltran's shot.

Canadian goalkeeper Dayne St. Clair, who plays for Minnesota United, came on in the 32nd minute for Andre Blake. He made a fine save in the 44th minute, diving to his left to parry Juan Dinenno's header.

Miller was one of eight halftime substitutions for the MLS all-stars. St. Clair, from Pickering, Ont., gave way to Sean Johnson in the 61st minute.

This was the second edition of this format for the MLS All-Star game, setting it apart from the other major U.S.-based pro sports leagues. The MLS team beat Liga MX on penalty kicks in Los Angeles last year after a 1-1 draw in regulation. The MLS has not committed to an All-Star rematch.

The two leagues are more business partners than fierce rivals, with only one Mexican player in the starting Liga MX lineup: Fernando Beltrán. The MLS team had Vela, Javier “Chicharito” Hernández and Julián Araujo, who was born in the U.S. and has dual nationality.

But the MLS, which was formed more than 50 years after Liga MX, certainly will take another sign that it's catching up to its southern neighbor. The Seattle Sounders became the first MLS club to defeat a Liga MX team for the CONCACAF Champions League title earlier this year when they beat Pumas UNAM.

“I’ve been in America now 13 years and this is the closest it’s ever been,” Heath said. “Every time the U.S. plays Mexico now, I’m not sure who’s going to win the game.”

Next year, the leagues will compete in an expanded Leagues Cup tournament — the first to include all 47 clubs from MLS and Liga MX. The winner will advance directly to the CONCACAF Champions League round of 16.

The timing of the showcase this year also created a bonus opportunity for the U.S. national team members to connect, with the World Cup looming in a little more than three months.

There were seven MLS All-Stars currently listed on the U.S. roster, which has yet to be finalized for Qatar: defenders Walker Zimmerman, DeAndre Yedlin and Aaron Long, forwards Jordan Morris, Paul Arriola and Jesús Ferreira and Johnson.

Zimmerman and Morris were in the starting lineup. Arriola subbed in and had an early second-half goal erased by an offside call on Brandon Vázquez, who teed up Arriola with a perfect setup in front. Vázquez, who's second in the MLS with 14 goals, has played his way into strong consideration for the U.S. team with his breakout season for FC Cincinnati.