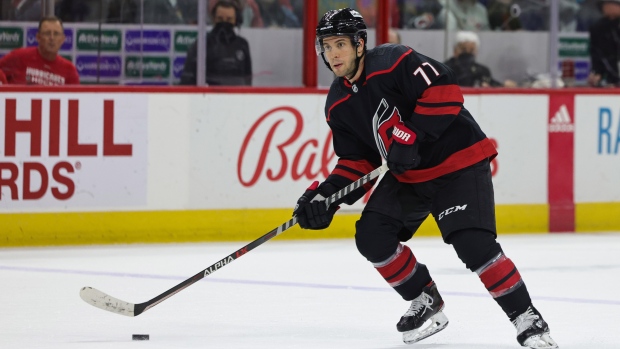 The Carolina Hurricanes traded defenceman Tony Deangelo and a seventh-round pick to the Philadelphia Flyers for three draft picks on Friday.

The Hurricanes are receiving a 2022 fourth-round pick (No. 101 overall), a 2023 third-round pick, and second-round pick in 2024 from the Flyers in the deal for DeAngelo, who signed a two-year, $10 million contract with Philadelphia after the trade.

The 26-year-old, who was previously scheduled for restricted free agency, had 10 goals and 51 points in 64 games with Hurricanes last season. He added one goal and 10 points in 14 playoff games.

It’s DeAngelo and a 7th to Philly. As reported, Canes get 2nd, 3rd and 4th round picks which are spread out over next three years https://t.co/5XC6p0czNK

He was signed to a one-year, $1 million deal by the Hurricanes last off-season, after appearing in just six games with previous season with the New York Rangers following a team suspension after an incident with a teammate following a game.

Deangelo was drafted 19th overall by the Tampa Bay Lightning in the 2014 NHL Draft, but did not make his NHL debut until the 2016-17 season, for the Arizona Coyotes.

His career has featured no shortage of movement, with defenceman set to play for his fourth different team in seven years in Philadelphia.