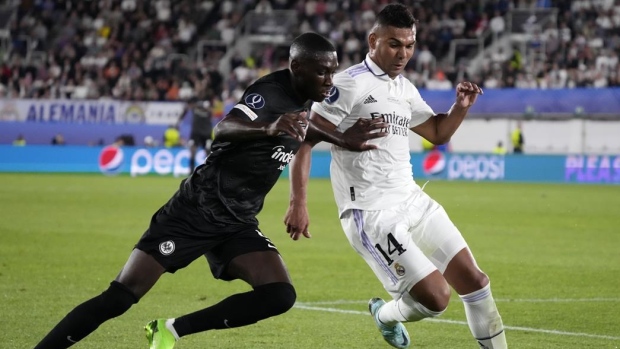 Erik ten Hag has some sorely needed help for his midfield.

Manchester United is finalizing a transfer for Casemiro from Real Madrid in a deal worth up to €70 million, reports Fabrizio Romano.

Casemiro has full agreement on four year deal, option until 2027.

Medical and then visa to be sorted during weekend. pic.twitter.com/tiuAdkCR81

The Brazil holding midfielder will sign a four-year deal with the Red Devils with a one-year option that could take him through 2027. The deal is pending a medical and obtaining a visa.

United hopes to have Casemiro in the lineup for Liverpool's visit to Old Trafford on Monday.

A native of Sao Paulo, Casemiro is in his 10th season at the Bernabeu. He has made 336 appearances across all competitions. The 30-year-old Casemiro has won five Champions titles, three La Liga titles and the 2014 Copa del Rey in his time with Los Blancos.

Earlier on Friday, Real manager Carlo Ancelotti confirmed that the player was headed for the exit door.

"The negotiations are ongoing right now, he is still our player but his will is to leave," Ancelotti "I have spoken with him. Casemiro, for what he has done and the person he is, we must respect that desire. Casemiro wants a new challenge and we understand his feeling, I do not think there is a way back."

For his part, ten Hag offered no comment at his Friday media briefing.

United currently sits at the bottom of the table after two matches - losses to Brighton and Brentford.