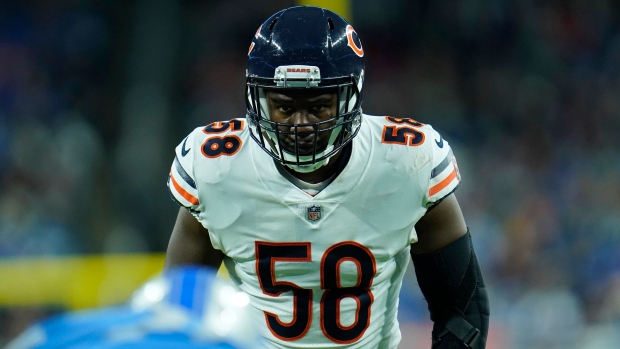 Chicago Bears star linebacker Roquan Smith is requesting a trade, saying the team has not negotiated in good faith for a contract extension.

Smith, who does not have an agent, wrote Tuesday in a statement to NFL.com that he has “officially” asked to be dealt and that it was “deeply painful.” He said he has been trying to negotiate an extension since April and accused the team of trying to take advantage of him.

“Unfortunately, the new front office regime doesn't value me here,” he wrote. "They’ve refused to negotiate in good faith. Every step of this journey has been ‘take it or leave it.’ The deal sent to me is one that would be bad for myself, and for the entire LB market if I signed it.”

The Bears made big changes after going 6-11 last season and missing the playoffs for the ninth time in 11 years. They fired general manager Ryan Pace and coach Matt Nagy and replaced them with Ryan Poles and Matt Eberflus.

Smith participated in voluntary and mandatory offseason workouts. He reported to training camp on time and was placed on the physically unable to perform list.

“I wanted to be a Bear for my entire career, help this team bring a Super Bowl back to our city,” Smith wrote. “However, they have left me no choice than to request a trade that allows me to play for an organization that truly values what I bring to the table.”

Smith said he hasn't talked to team ownership. He left the door ajar for the McCaskey family to “salvage this.”

“But as of right now, I don't see a path back to the organization I truly love,” he wrote.