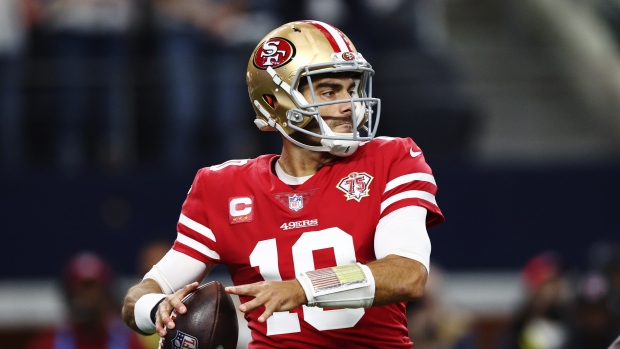 The Cleveland Browns could turn to the Bay Area should the suspension to quarterback Deshaun Watson increase from six games.

Cleveland.com's Mary Kay Cabot reports the team will consider San Francisco 49ers QB Jimmy Garoppolo if Watson is made unavailable for most of the season.

Cabot notes that the 30-year-old Garoppolo, who was given permission by the Niners to seek a trade after the designation of Trey Lance as the team's starter, is believed to be available for a late-round pick. While Garoppolo is owed $24.2 million this season, his deal does not become guaranteed until Sept. 10, which would give the Browns time to sign Garoppolo to a new deal with a lower base offset by a large signing bonus.

Garoppolo is 33-14 as a starter over his career with the Niners and New England Patriots and has started six playoff games, including an appearance in Super Bowl LIV in 2020. It is his experience that the Browns would value over former Pats teammate Jacoby Brissett, the QB currently set to start for the Browns in Watson's absence.

Garoppolo underwent offseason surgery on his throwing shoulder, but he's been fully cleared for practice as of last week.

A ruling from commissioner Roger Goodell's designee, Peter Harvey, in the appeal of the six-game ban handed down by Sue L. Robinson on Aug. 1 could come as soon as Friday ahead of the Browns' first preseason game in which Watson is expected to start.