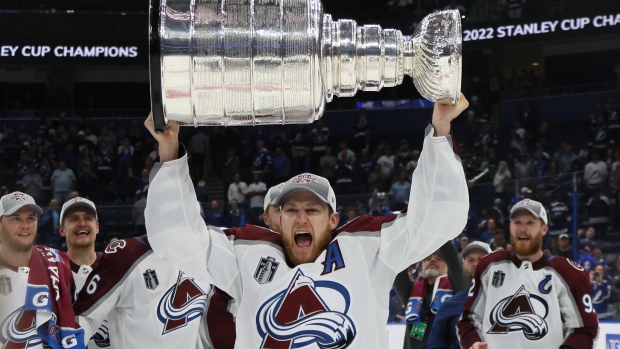 Colorado Avalanche superstar Nathan MacKinnon says an extension to stay in Denver could be coming soon.

The 27-year-old centre said at the NHL Player Media Tour Thursday that he and the team are "pretty close" on an extension and hopes to have it done ahead of the Avalanche's season opener on Oct. 12.

#avs star Nathan MacKinnon says his contract extension talks are close and will be done soon and won’t be single digits. He hopes it to be done by opening night or he’d prefer not to talk during season. Joked he doesn’t like the label of being most underpaid player in NHL.

Nathan MacKinnon, speaking at the NHL Player Media Tour, says his extension with the Avalanche is “pretty close” and he’s hoping it’ll get done “soon.” As for AAV, it will be “fair” but “not going to be a single digit.”

MacKinnon's agent, Pat Brisson, told TSN Hockey Insider Pierre LeBrun that talks have been more progressive lately but there is still nothing concrete.

"We've been having ongoing discussions for a couple months now and recently the talks have been more progressive but still a lot to cover and nothing to report," Brisson said.

From agent Pat Brisson:
“We’ve been having ongoing discussions for a couple months now and recently the talks have been more progressive but still a lot to cover and nothing to report” https://t.co/8lhcNvBSg3

Heading into the final season of his seven-year, $44.1 million contract with an average annual value of $6.3 million, MacKinnon said his next deal will be “fair” and “good for both sides.”

The Cole Harbour, N.S., product is fresh off leading the Avalanche to the Stanley Cup in June, tallying 13 goals and 24 points in the postseason.

The first overall pick by Colorado at the 2013 draft, he won the Calder Trophy as rookie of year in 2014 after 24 goals and 63 points in 82 games in his first season. A five-time all-star, he took home the Lady Byng Memorial Trophy in 2020.

Internationally, he has won gold (2015) and silver (2017) with Team Canada at the World Championships.