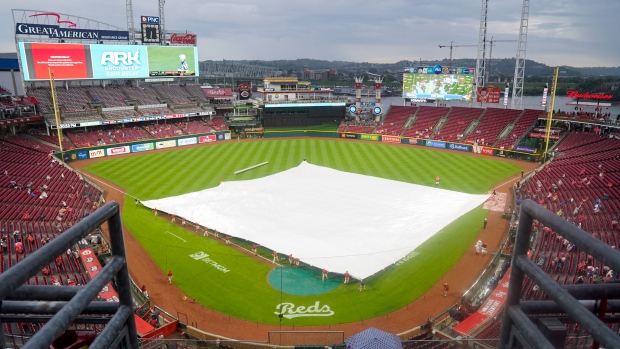 CINCINNATI (AP) — The game between the Colorado Rockies and Cincinnati Reds scheduled for Saturday night was postponed after a wait of 3 hours, 45 minutes.

The game never got started and will be made up as part of a traditional doubleheader on Sunday.

A concert by country music star Cole Swindell, originally planned for the field after the game, went on during the delay from an area under cover between the ballpark and the adjacent indoor arena. The concert was shown on the ballpark video boards.

Both scheduled starting pitchers, Colorado’s Germán Márquez (7-10, 4.97 ERA) and Cincinnati’s Nick Lodolo (3-5, 4.30), began warming up in anticipation of a 9:50 p.m. start before the rain increased and the field was re-covered.

Márquez and Lodolo are scheduled to start Sunday's opener. Rockies righty José Ureña (3-5, 5.80) and Reds righty Chase Anderson (0-2, 27.00) are due to start the nightcap.

Colorado went into Saturday last in the NL West. The Rockies have lost seven of their last nine games.

Reds second baseman Jonathan India, last season’s NL Rookie of the Year, is on a career-high 15-game hitting streak (21 of 59, .356), the longest active string in the major leagues.