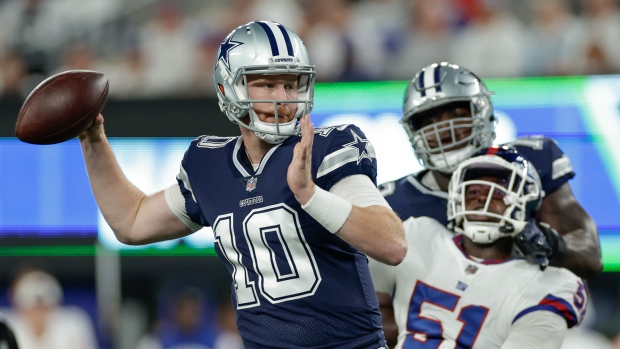 Even though Rush did it again in the first NFC East game for the defending division champs, Jones had come back to his senses.

“He’s doing a great job and I know that he doesn’t have anybody that’s supporting him more than Dak,” Jones said on his radio show Tuesday morning after a 23-16 “Monday Night Football” victory at the New York Giants.

“Because when Dak does get back, if we have a chance to have a record that lets us be in the hunt and lets us be viable, considering the loss of time we had with Dak, then that’s what a quarterback is about. I think we got a good one in Cooper.”

By “good one,” Jones meant a backup. His tone was different last week after a victory over defending AFC champion Cincinnati, when Jones, with that mischievous smile, said he would welcome a QB controversy because that would mean the Cowboys were winning.

After coach Mike McCarthy, star running back Ezekiel Elliott and even Rush himself shot all that down, the undrafted sixth-year player went out and did it again.

Rush is the only quarterback since the 1970 merger to lead game-winning drives in the fourth quarter or overtime of his first three career starts.

The first was a 20-16 victory at Minnesota last year when Prescott was sidelined by a calf strain. Rush knew it would be multiple starts this time after Prescott fractured his right thumb in a season-opening loss to Tampa Bay.

Now the question is how many more. Jones said Prescott will be “able to play within a week or two.”

“Want to keep winning,” Rush said after improving his career record to 3-0. “As long as I’m in there, let’s just keep winning. Playing smart, trusting each other, both sides of the ball, and we’ll be all right.”

The running back tandem of Elliott and Tony Pollard looked as good as it ever has. Pollard broke the longest Dallas run of the season at 46 yards to set up a field goal in his fourth career 100-yard game (105). Elliott had a season-best 27-yarder and finished with 73 while scoring a tying touchdown in the third quarter.

Penalties are still a problem. A holding call derailed a promising game-opening drive. Cornerback Jourdan Lewis made unnecessary contact with a receiver on an incompletion on third-and-14, and the Giants drove to a tying field goal. Cornerback Kelvin Joseph, filling in briefly for Trevon Diggs, grabbed a receiver's facemask to negate a sack with the Cowboys trying to protect a 10-point lead in the fourth quarter.

DE DeMarcus Lawrence tied a career high with three sacks, helping the Cowboys to an NFL-best 13 sacks through three games. Those were Lawrence's first of the season, and it was his first multi-sack game since 2018.

At halftime, WR CeeDee Lamb's stock was way down after a drop when he was wide open on a deep throw and might have scored. But Dallas' new No. 1 receiver rebounded in a big way in the fourth quarter. Lamb's one-handed grab put the Cowboys in front for good after he kept that drive alive by hanging on despite a big hit right at the down marker on a fourth-and-4 catch.

That was Pro Football Hall of Famer Kurt Warner for the “Greatest Show on Turf” St. Louis Rams, who won the Super Bowl. Warner was MVP of the regular season and Super Bowl that season.

If Prescott doesn't play against the Commanders, he'll miss an NFC East reunion with fellow 2016 draft pick Carson Wentz, who went No. 2 overall to Philadelphia while Dallas took Prescott in the fourth round.

After Prescott won NFL Offensive Rookie of the Year, they figured to be division rivals for years.

But Wentz's career with the Eagles went south, then he spent last season with Indianapolis before a season-ending loss to last-place Jacksonville kept the Colts out of the playoffs and soured that relationship.