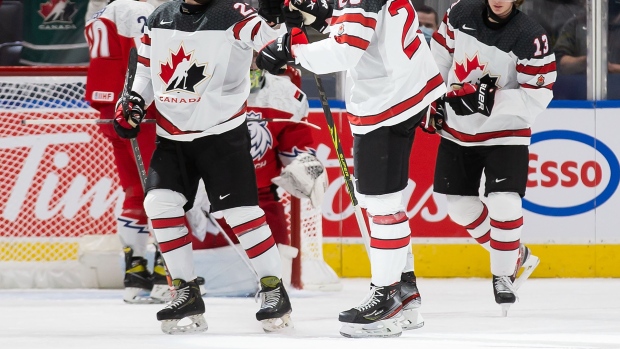 A group of Hockey Canada’s corporate partners have been discussing the possibility of permanently ending their business relationships with the national sport organization as soon as this week, using “reputational damage” clauses in their contracts to justify the moves, four people familiar with the matter told TSN.

Hockey Canada has been trying to avoid that possibility, scheduling calls with sponsors as recently as Wednesday to make the case for maintaining ties. At least one of the federation’s national sponsors, Mississauga, Ont.-based Janes Family Foods Inc., has already informed Hockey Canada of its decision to end their partnership, one of the sources said.

Hockey Canada has several tiers of sponsors, including four premier partners – Esso, Nike, Tim Hortons and Telus – who pay as much as $2 million per year for the association, a source said. Tim Hortons announced Wednesday afternoon that it will not be supporting the organization’s men’s hockey teams during the 2022-23 season.

“We’ve communicated to Hockey Canada on many occasions that the organization needs to take strong and definitive action before it can regain the faith and trust of Canadians,” a Tim Hortons spokesperson wrote in an email to TSN. “We’re deeply disappointed in the lack of progress that Hockey Canada has made to date. We officially informed Hockey Canada this week that we have pulled out of all men’s hockey programming for the 2022-23 season, including the men’s world junior championships.

“We continue to fund Canada’s women’s and para hockey teams, as well as youth hockey.”

A Telus spokesperson said the company was preparing a statement. Spokespeople with Esso and Nike did not respond to emails requesting comment.

“Hockey Canada continues to have discussions with its corporate partners on the organization’s action plan and the important steps being taken to foster a safe and positive environment for all participants on and off the ice,” Hockey Canada spokesman Jeremy Knight wrote in an email to TSN.

The scrutiny Hockey Canada has been under in recent weeks has intensified over the past 24 hours following the latest Canadian Heritage standing committee hearing in Ottawa on Tuesday. During a two-hour hearing, former Hockey Canada board chair Michael Brind’Amour and interim chair Andrea Skinner stubbornly rejected criticism of the organization, saying Hockey Canada has been unfairly targeted by the media.

After Tuesday’s hearings, Sport Minister Pascale St-Onge announced that Hockey Canada would be the subject of a thorough audit going back to 2016.

Later Tuesday night, Hockey Quebec’s board voted against forwarding player registration fees to Hockey Canada because it had lost confidence in the national organization’s leadership.

“We’ve been very uncomfortable with Hockey Canada. This has been sitting in the back of our minds for a long time,” Hockey Quebec chief executive Jocelyn Thibault said in an interview with TSN. “There’s a point it hits your values. We need to straighten this out.”

Thibault said the provincial federation was scheduled to make two payments to Hockey Canada in November and March. The federation typically forwards about $2 million per year to the national federation, Thibault said.

He also said Hockey Quebec made the decision to act without consulting other provincial branches, although there has been communication among branches in recent weeks about the worsening scandal.

After Hockey Quebec’s announcement, Hockey Nova Scotia said its board would meet next week to discuss matters related to Hockey Canada. The Ontario Hockey Federation said that it has requested to Hockey Canada that it not collect a $3 per player assessment fee this season.