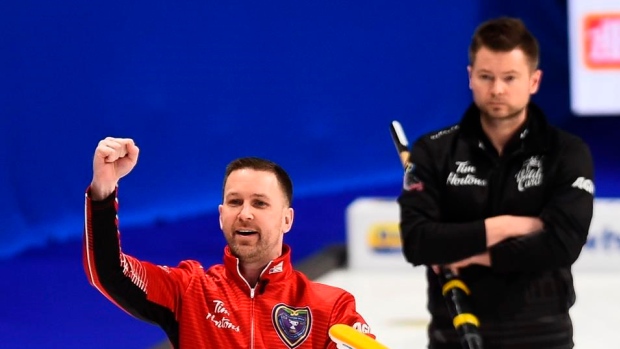 For just the fifth time in its nearly century-long history, the Canadian men's curling championship will have a new title sponsor after this season.

The 2023 Brier, set for March 3-12 in London, Ont., will be the final one with Tim Hortons as title sponsor, Curling Canada said Tuesday. The organization said it is currently "seeking expressions of interest" for title sponsorship of the event, which dates back to 1927.

In a news release, Curling Canada CEO Kathy Henderson thanked Tim Hortons for its long-standing commitment to promoting curling in Canada. She added they will continue to work together at the youth, grassroots and community level through regional marketing and sponsorship commitments.

"We don't often sell this property because it's a pretty big one obviously in the Canadian sports community," said Nolan Thiessen, Curling Canada's executive director of curling fan experience and marketing.

"It's a celebration of a long-standing partner and an exciting opportunity to look forward to bringing someone on board with another new deal and someone new to the sport."

The restaurant chain, primarily known for its coffee and doughnuts, first sponsored the Brier in 2005. Tim Hortons has been a partner with Curling Canada since 1996.

The only other title sponsors in Brier history were Macdonald Tobacco, Labatt Breweries and Nokia.

"For the past 20 years, Tim Hortons and our restaurant owners have been proud to support Curling Canada and sponsor this iconic and world-class sporting event in Canada," Tim Hortons chief marketing officer Hope Bagozzi said in a release.

"And we look forward to continuing to introduce the game to new curlers and support curling programs in communities all across Canada."

Curling Canada is also searching for a new title sponsor of the Canadian Curling Trials, a federation spokesman confirmed in an email.

That competition is held every four years to determine the Canadian curling team representatives at the Winter Olympics. Tim Hortons served as title sponsor for the five editions of that event since 2005.

In its release, Curling Canada said the Brier is among the "most highly coveted and valued sport properties in Canada."

"Sometimes it's time for a change and things run their course," Thiessen told The Canadian Press from Madrid. "It's more about looking forward to something new and we're very confident in the Brier as a property. So I don't have any concerns about us not having a title partner in time for 2024.

"I think we just want to find the right partner with some sort of a deal that really makes sense for all the operations of Curling Canada."

The organization said the Brier has an average audience reach of 6.5 million over the course of the 10-day competition, with an average minute audience for the final that can exceed one million viewers.

"Any event that's approaching its 100th anniversary, you're doing something right," Thiessen said. "It's the one word across Canada that people just know — whether they're a curling fan, a sports fan or just a Canadian — people know the word Brier means curling.

"So I think that's the specialness of it and what makes it a property that we're excited to take out to the marketplace. It's so ingrained in the sport."

The Canadian women's curling championship — the Scotties Tournament of Hearts — is sponsored by Kruger Products.