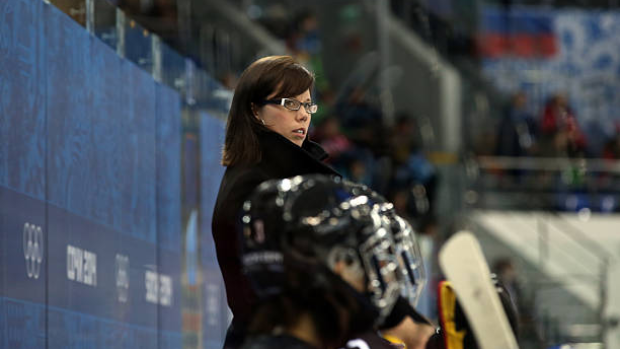 Czechia may not be a traditional powerhouse when it comes to women’s hockey, but new head coach Carla MacLeod believes the team could turn some heads at this year’s world championship.

“There's a desire to make a statement and to be rewarded for the effort,” she said. “I think there's a real, genuine fire in the pit of our stomachs to continue on the path we’re on.”

The 2022 IIHF Women’s World Hockey Championship begins Aug. 25 in Denmark. Czechia will be competing in Group B and kicks off the tournament on Aug. 26 against Hungary.

MacLeod, a retired blueliner who won two Olympic gold medals with Canada, took over as the Czech bench boss in April.

“It's just so critical,” she told TSN. “I think with anything in life, if you feel connected and you feel validated, you tend to give a little more and you want to help more. So, that was the goal, was for our staff to get in with the team and make sure that they could get a feel for who we were.”

MacLeod tried to achieve a quicker comfort level among the group with self-described “little things,” such as mixing seating arrangements for players and staff members during meals as a form of team building.

“I don't know if the girls hated it or liked it,” she laughed. “But they seemed to have smiles on their faces and certainly engaged us in conversation.

“Heading into this next phase, I have a better idea of where our group’s at, who the characters in our group are, who the women are, and the personalities behind them, which is really important. You don't see that when you're watching from the press box.”

This is MacLeod’s second foray into coaching international hockey, but her first as a head coach. After retiring in 2010, the Calgary native was a member of the coaching staff for the Japanese women’s team from 2012 to 2014.

The world championship is part of a hectic schedule for MacLeod, who is still retaining her head coaching duties at the University of Calgary. She says so far juggling both roles has been manageable and gives a lot of credit to her staff members on both teams.

Despite limited time so far with the Czech team, MacLeod’s early impressions have been felt by the players.

“She's been very positive, a lot of positive energy, and I think she's a great speaker,” captain Alena Mills told TSN. “I think we have a great game plan. We had a meeting about how we want to play, what we want our identity to be. So, I’m all in.”

Part of that identity involves MacLeod wanting players to be able to express themselves on the ice.

“[She’s] giving us the freedom to play, to be creative,” Mills said about MacLeod’s approach during the team’s first camp.

For MacLeod, it’s part of the process of instilling confidence in her new team.

“I don't even know if they know how good they are, in all honesty,” she said. “Doesn't mean we don't have areas to get better in. We certainly do, and we're going to push in those areas. But just learning to trust themselves within the game – I think it's a bit of a philosophy change or just a different style of coaching than they're accustomed to, us freeing them up to make reads and to make plays within a structure, of course, but not a systematic, absolute-routed structure.”

MacLeod is the first woman to serve as head coach in the history of the Czech women’s national team, a decision that is being applauded by Gina Kingsbury, director of operations for Canada’s women’s program and MacLeod’s former teammate.

“I think that's a great move from Czechia and also a great move from Carla,” she told TSN. “Carla will be fantastic for them… If these countries are seeking the best coaches, are looking at how they can get better and investing in it – it just means that the game is healthy and that countries are really wanting to raise their game and continue to grow.”

For Mills, arguably the more important aspect is having someone with MacLeod’s on-ice experience. She played in more than 80 games for Canada and, along with her two Olympics golds, won four world championship medals, taking home gold in 2007 and MVP honours in 2009.

“I've had great female coaches. I've had great male coaches in my career. So, I don't always think it's about the gender. It's about who the person is,” Mills said. “But I think for some people, they will be more open to information when it's coming from somebody who has been in their position, which Carla has.”

There have been some early returns with MacLeod behind the bench. Czechia played a two-game exhibition series against Finland last month, defeating the Olympic bronze medallists in a shootout in the opener before dropping the second game 4-3.

“I can see the potential and what could click here,  but it's a journey to get there,” MacLeod said. “They've got the tool set, and it is just that belief, that confidence. We're in a hard industry that it doesn't just come innately. You have to earn that, and that's the process we're in.”

One of the biggest emphases for MacLeod and her players right now is establishing better net front presence.

“When we watch previous game tape, they were so good at owning the puck in the offensive zone but didn't always look to attack,” she said. “That's just a little piece that we're trying to build the confidence around.”

“It's not like we throw [out] what we've done in past, like we crumple a little paper and throw it away,” added Mills. “It's more building on it and sticking to our strengths, which is puck possession, and building upon that, adding little details that can help us capitalize.”

The Czechs have a lot to build on after their first appearance in the Olympics earlier this year. They finished second in Group B to advance to the quarter-finals of the Beijing Games, where they met the United States. Czechia surprised the defending gold medallists by jumping out to a 1-0 lead in the second period.

The Americans tied it quickly, but the game remained deadlocked until the third, when the U.S. was finally able to take the lead and would go on to win, 4-1.

Although it was a disappointing exit for the Czechs, Mills describes the game as an eye-opening experience.

“We never played U.S. or Canada, so it's like, ‘Oh my god, they play so well.’ And it was a bit intimidating for us,” she said. “But now that we played against them, it's like, ‘Oh, we can take the puck away from them. We can push them on the boards. We can score the first goal.’ So, I think it was huge in our Czech hockey development and helping us to maybe get a bit more of a championship mentality.

While the performance gave the players a boost of confidence, Mills is proudest of the impact her team had off the ice.

“I think we definitely changed the way the Czech society sees women's hockey in Czechia,” she said. “And I think that's tremendous, and that was thanks to how we played…. Regardless of the result, people started paying attention to women's hockey.”

“We know that the strides have been made from an Olympic perspective, which was huge,” MacLeod added. “But by no means is this group content with that. And so, the identity of the group is one of continuing to prove themselves and prove to the world what Czech hockey is about, and what these women have been working so hard to achieve.”

The Czechs will have another chance to prove themselves at the women’s worlds. The team was ousted in the quarter-finals last year after a narrow 1-0 loss to Finland.

But no matter the outcome, MacLeod is eager to face the road ahead.

“I think one of the biggest things anytime you take on a new role, and particularly [when] you’re being inserted into a team with a rich history, is just understanding that the journey isn't just rosy,” she said.

“That's the part that I'm most excited about is the chance to actually work through, not only the successful stuff, but the setbacks and the challenges that we face. To me, that's the joy of coaching.”