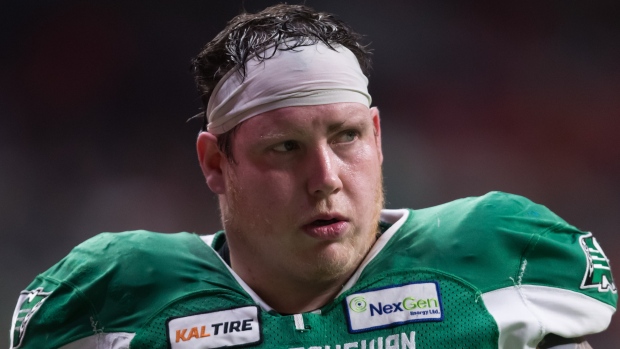 After missing significant time with a broken fibula, Saskatchewan Roughriders centre Dan Clark returned to practice on Monday ahead of the Riders clash with the Winnipeg Blue Bombers on Friday Night Football.

"I think the last however many weeks have, mentally, been a grind for myself," said Clark to the media.

"I put myself in a good situation and continue to believe in the work ethic I have and our training staff has done a great job keeping together mentally."

The 34-year-old was carted off the field in the final moments of the Roughriders' game against the Edmonton Elks in Week 2.

A native of Regina, Sask., Clark has played his entire 10-year career with the Roughriders, appearing in 127 games. He was named a CFL All-Star in 2019 and the Riders' Most Outstanding Offensive Lineman in 2019 and 2021.

"(It) took about 45 minutes of pity party in the two days that I had and I was, 'I don't know if I can come back from this, I'm too old but what crept into my mind was I survived a car accident, being ejected from that, so a broken leg ain't nothing."

With the Riders (6-8) entering an important stretch of the season, Clark is excited to be back and contribute however he can.

On the topic of how his rehab went, Clark admitted it was tough.

"Depending on week-to-week: boring, monotonous, just a grind to be able to put us in those situations of if I'm going to be able to get better."

As for if he will play against the Blue Bombers, Clark says he's going to see how he feels this week.

"We're going to going to go through this week and see what kind of happens, how my ankle goes through the situation. But, mentally, I'm going to be prepared to play if I need to and be able to help out the guys any way I can."