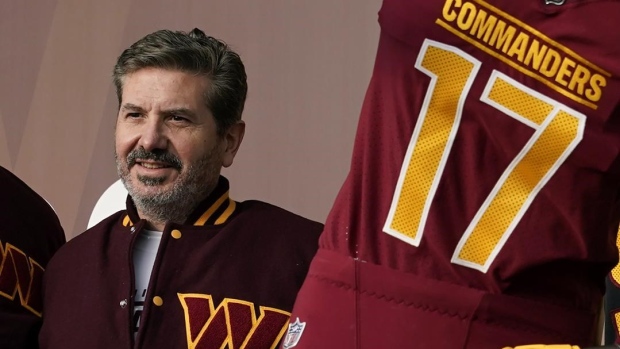 WASHINGTON (AP) — The Washington Commanders created a “toxic work culture” for more than two decades, “ignoring and downplaying sexual misconduct" and what former female employees described as hundreds of instances of sexual harassment by men at the top levels of the organization, according to a report published Thursday by the U.S. House Committee on Oversight and Reform.

The misconduct included Commanders owner Dan Snyder, who is accused of inappropriately touching a former employee at a dinner, having staffers produce a video “of sexually suggestive footage of cheerleaders” and ordering that women auditioning to be cheerleaders walk on the field “while he and his friends gawked from his suite through binoculars," according to the report.

The House committee opened its investigation in October 2021 after the NFL did not release a written report of its review of the team’s workplace culture. The league's independent review by attorney Beth Wilkinson was completed in summer 2021 and resulted in a $10 million fine to the team.

Using hearings, interviews and depositions, the House report concluded Snyder interfered in its investigation and Wilkinson's review, which stemmed in 2020 from former employees alleging rampant sexual harassment by team executives.

The team owner interfered with the House committee’s investigation by “intimidating witnesses,” “refusing to release former employees from their confidentiality obligations” and using a “secret” agreement with the NFL to block access to more than 40,000 documents collected during Wilkinson’s review, according to the report.

Snyder also conducted a separate shadow investigation, which the report said was used by his lawyers to “cast him as the victim of a defamation campaign ... and deflect responsibility for the team's toxic work culture."

The House committee said Snyder was evasive, misleading and said more than 100 times he did not recall things during his deposition.

The NFL was not shielded from criticism in the committee's report, which said the league “misled the public about its handling of the Wilkinson Investigation" and “has not sought true accountability for those responsible.” The report also said the NFL doesn't ensure “that its own workplaces are free from discrimination and harassment," citing the fact that the NFL does not require teams to report confidentiality and nondisclosure agreements to league headquarters.

The NFL defended its cooperation with the House investigation in a statement issued Thursday afternoon, saying it produced “nearly a half million pages of documents," responded to written inquiries and “voluntarily participated” in the June 22 public hearing where NFL Commissioner Roger Goodell answered questions.

The NFL also said the Commanders had put in place recommendations that Wilkinson suggested.

The league said it is committed to ensuring all employees at every team work in an environment “that is free from discrimination, harassment or other forms of illegal or unprofessional conduct.”

Legal counsel for the Commanders and Snyder, John Brownlee and Stuart Nash, said in a statement the committee's work was “one-sided" and there were “no new revelations" in Thursday's report. They said the team is "proud of the progress it has made in recent years in establishing a welcoming and inclusive workplace, and it looks forward to future success, both on and off the field.”

Republicans have long considered the House oversight committee's work on the topic a partisan affair and have said they would immediately drop the case once they take control of the House in early 2023. Kentucky Republican Rep. James Comer, a ranking member, reiterated that desire in a statement Thursday, adding that the investigation was “a misuse of resources” and was meant to “gain cheap headlines and ignore any information that did not align with (Democrats’) predetermined narrative.”

Women who had worked for the Commanders testified to the House committee in February that they were regularly subjected to sexual comments or harassment. A former director of marketing estimated it happened more than 200 times to her, a former business development employee said it was “over 100 times” — “almost a part of my everyday experience" — and a former marketing coordinator said her boss harassed her “over 500 times.”

Lisa Banks and Debra Katz, who represented more than 40 ex-Commanders employees, said in a statement Thursday the “committee’s work resulted in important legislation limiting the use of non-disclosure agreements, which will help prevent this type of widespread harassment from happening in other American workplaces.”

Banks and Katz are referring to one of two bills introduced in June by ranking committee member Rep. Carolyn Maloney, a Democrat from New York. The other bill stipulates that employers would need consent for taking and using images of employees; neither have gone beyond being referred to a committee.

The NFL also has a current investigation into the Commanders, which came about after the House committee heard testimony from a former team employee that Snyder groped her at a team dinner and tried to force her into his limousine. Snyder has denied those allegations. The Associated Press does not identify alleged victims of sexual assault or harassment unless they’ve granted permission.

Former U.S. Attorney Mary Jo White is running that NFL investigation, which also involves claims of financial improprieties by a former vice president of sales. The NFL has said White’s findings will be made public.

The District of Columbia recently filed two civil lawsuits against the team — including one over what the D.C. attorney general called a scheme to cheat season-ticket holders out of money. The Commanders settled with the state of Maryland, agreeing to return security deposits to former season ticket holders and pay a $250,000 penalty.

All of the workplace scandals and investigations have led other team owners to question whether Snyder should be a peer, with Indianapolis Colts owner Jim Irsay saying in October there's “merit to remove” Snyder, but that it's “something we have to review." He added: "It’s gravely concerning to me the things that have occurred there over the last 20 years.”

Snyder and wife Tanya recently hired Bank of America Securities to explore selling part or all of the team he has owned since 1999. The Commanders are worth an estimated $5.6 billion, according to Forbes — a sevenfold increase over the then-record $800 million Snyder paid for the team in 1999.

Despite the scandals and legal battles, Washington is in the playoff race for an NFC wild-card spot with a 7-5-1 record.