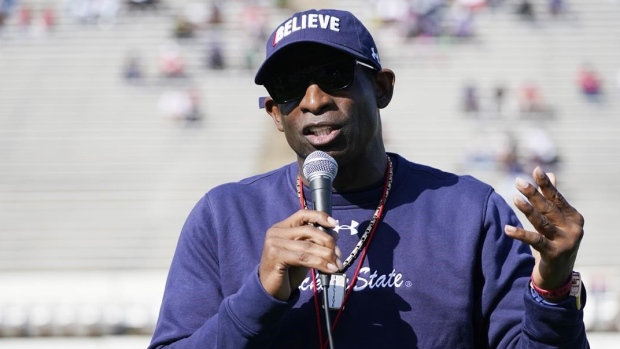 Deion Sanders is a wanted man and plans to reveal what program he intends to coach next season by Sunday, reports FOX13's Kevin O'Donnell.

The current head coach of Jackson State is believed to have narrowed down his choices to the vacancies at Colorado, Cincinnati and South Florida.

Deion Sanders has been telling recruits he will be at a school on Sunday. Decision appears to be down to Colorado, Cincinnati and USF.

A cornerback for the vast majority of his playing days, the 55-year-old Sanders is in the Pro Football Hall of Fame after a 14-year NFL career with the Atlanta Falcons, San Francisco 49ers, Dallas Cowboys, Washington and Baltimore Ravens and winning Defensive Player of the Year in 1994. He was also inducted into the College Football Hall of Fame after a standout four years at Florida State.

The Fort Myers, FL native has been at the helm of the Jackson State program for three years after nearly a decade of coaching at the high-school level.

He led the Tigers to a perfect 11-0 regular season in 2022 and and will play Southern for the Southwestern Athletic Conference Championship on Saturday.

The Buffaloes' vacancy opened up with the firing of Karl Dorrell in early October after a winless start to the season. Mike Sanford Jr. served as interim head coach since the firing and went 1-6 with the worst mark in the Pac-12. Sanders was believed to have been formally offered the Colorado job over the weekend.

The Bearcats' job opened up when Luke Fickell left to take the job at Wisconsin on Monday.

The USF job came open when Jeff Scott was fired earlier this month in the midst of his third season, posting a record of 4-26 during that period.