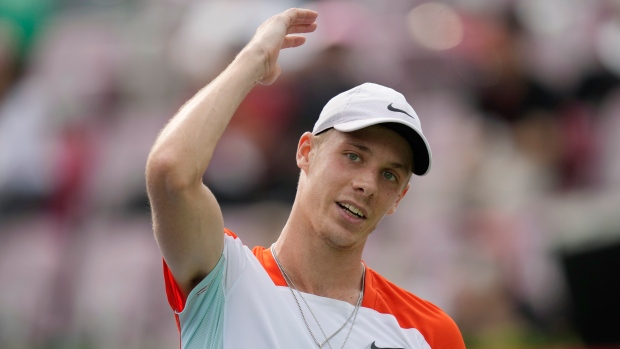 SEOUL, Korea, Republic Of — Denis Shapovalov advanced to the Korea Open final with a 7-5, 6-4 win over Jenson Brooksby in semifinal action Saturday.

The Richmond Hill, Ont., native, who is the fourth seed in the event, fired six aces and broke on four of five opportunities in the match. He also won 72 per cent of first-serve points.

"I'm very happy with my performance," the Canadian said. "Obviously Jenson is a super tricky opponent and I'm just happy to win and be in the final.''

Shapovalov, 23, entered the match coming off a straight-sets quarterfinal win over Radu Albot.

Brooksby, the eighth seed in the tournament, moved on by walkover. The American was set to face Cameron Norrie in the quarterfinals.

Shapovalov will next play Yoshihito Nishioka on Sunday.

"I've got to keep playing my game," Shapovalov said. "He's a great player, it's going to be a tough match."

This report by The Canadian Press was first published Oct. 1, 2022.