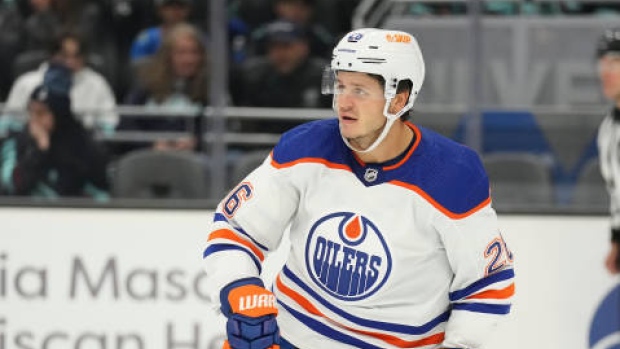 The Edmonton Oilers have placed centre Mattias Janmark and defenceman Dmitri Samorukov on waivers on Friday.

The #Oilers have placed forward Mattias Janmark & defenceman Dmitri Samorukov on waivers for the purpose of assignment to the @Condors.

Janmark, 29, signed a one-year, $1.25 million contract with the Oilers as an unrestricted free agent on July 17.

The 6-foot-1 centre played 67 games for the Vegas Golden Knights last season where he recorded nine goals and 25 points.

Drafted 79th overall in the 2013 NHL Draft by the Detroit Red Wings, Janmark has 66 goals and 158 points in 420 career games split between the Dallas Stars, Chicago Blackhawks, and Golden Knights.

The 6-foot-3 defenceman had three goals and 18 points in 51 games with the AHL's Bakersfield Condors and appeared in one game with the Oilers last season.

Both players will be assigned to the Condors if they clear waivers.

TRANSACTION: The #NHLJets have released F - Brad Lambert to the Manitoba Moose (AHL). The Jets have also placed D - Johnathan Kovacevic on waivers for the purpose of being assigned to the Moose.

Kovacevic will be assigned to the Moose if he clears waivers,

The 5-foot 10 forward has six goals and 18 points in 98 career games split between the Dallas Stars and Canucks.

He was originally drafted by the Minnesota Wild in the seventh round of the 2004 NHL Entry Draft, and debuted for the team in the 2009-10 season. He has also played for the Boston Bruins, Carolina Hurricanes and Anaheim Ducks in his 13-year NHL career.