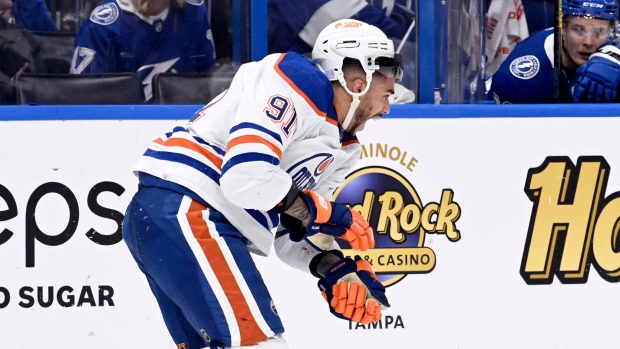 Edmonton Oilers forward Evander Kane is expected to miss three to four months and has been placed on long-term injured reserve, the team announced Wednesday.

#Oilers forward Evander Kane has been placed on LTIR & is expected to miss 3-4 months. Mattias Janmark & Klim Kostin have been recalled from the @Condors. We wish Evander the best in his recovery process. pic.twitter.com/FrDZnplPvp

The Oilers say forwards Mattias Janmark and Klim Kostin have been recalled in Kane's absence.

"Thank you all for the kind wishes and prayers from over the past several hours," Kane wrote in a statement on Twitter. "Obviously last night was an extremely scary moment for me and I'm still in a little bit of shock.

"I would like to thank the entire training staff of the Edmonton Oilers and Tampa Bay Lightning, along with all the doctors and paramedics who rushed to help treat and repair my injury. Without all of you I know things would've been much worse and I'm sincerely grateful. I won't be back next game, but I will be back and I look forward to being back on the ice playing the game I love alongside my teammates in front of our great fans."

On the mend, thank you 🙏 pic.twitter.com/8ZN7K5KAfc

Kane cut his left wrist in the second period of the Oilers' 3-2 win over the Tampa Bay Lightning on Tuesday. He fell to the ice after getting tangled up with Lightning defenceman Philippe Myers before Patrick Maroon accidently skated over his wrist.

A large amount of blood was seen on the ice as Kane frantically raced to the bench holding his wrist. Kane went to the dressing room with paramedics and doctors.

The team released an update later than Kane had been transported to hospital for surgery and was in stable condition.

"When an accident like that happens on the ice, that's where our first thought is. It's never fun to see one of your teammates in that kind of position," Oilers coach Jay Woodcroft said after his team's 3-2 win. "Shoutout to the great medical staff we have within our organization and the people here at the arena who were quick to respond and make sure that he was okay.

“It's scary, certainly scary,” Oilers star Connor McDavid said. “I think you could feel the energy in the entire rink kind of just get sucked out. We're thinking about him. We're hearing he's doing OK, but that's obviously initial.”

“You cringe when you see that,” Lightning coach Jon Cooper added. “It was tough to see. Hopefully he's going to be okay because you know, hockey, you battle against each other. It's a war (but) we're still a family.”

The 31-year-old has five goals and eight assists over 13 games this season with Oilers. Kane is in the first year of a four-year, $20.5 million contract after joining the Oilers from the San Jose Sharks mid-season in 2021-22.