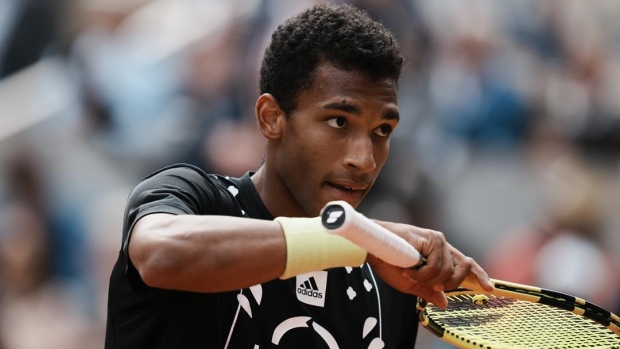 Montreal's Felix Auger-Aliassime was a fledgling teenager when he last played at the National Bank Open in his hometown.

He'll make his return to IGA Stadium as a top-10 player on the ATP Tour and a tournament headliner.

"I do embrace this position and I worked to be in this position," Auger-Aliassime said Sunday. "I'd rather be where I am today than anywhere else."

Ranked ninth in the world, the six-foot-four right-hander is the only seeded Canadian player at No. 6. Denis Shapovalov of Richmond Hill, Ont., is also in the field with wild-card entries Vasek Pospisil of Vernon, B.C., and Alexis Galarneau of Laval, Que.

Defending champ Daniil Medvedev of Russia is the top seed at the US$6.57-million event, which runs through Aug. 14.

Auger-Aliassime was ranked just outside the top 20 when the men's tournament was last played here in 2019. Known for his powerful serve and impressive forehand, he has developed a more efficient backhand in recent seasons and improved his net play.

Now ranked ninth in the world, he earned his first ATP Tour victory this season in Marseille. Auger-Aliassime is 30-17 on the season and is coming off a semifinal appearance last week in Los Cabos, Mexico.

"I think he has pretty much the whole package," Tsitsipas said of Auger-Aliassime.

The Canadian has a first-round bye and likely won't play his opening match until Wednesday.

"I'm proud of the results that I've had because this is what I play for," said Auger-Aliassime, who turns 22 on Monday. "At the end of the day, I'm a competitor and I like to win."

The 22nd-ranked Shapovalov, meanwhile, has a tough opener against Alex de Minaur, the world No. 21 from Australia.

"Getting through a match like that, I think it opens up a lot of confidence and a lot of doors," Shapovalov said. "I definitely would like to get through and obviously it's going to be extremely difficult."

Pospisil will open against American Tommy Paul while Galarneau will meet 15th-seeded Grigor Dimitrov of Bulgaria.

Five Canadian players were dispatched in the opening round of the 28-man qualifying draw on Saturday. Montreal's Gabriel Diallo won his match but fell to Hugo Gaston of France on Sunday.

Gaston had a 6-2, 2-1 lead when Diallo retired due to heat exhaustion.

The temperature hovered around 32 C on Sunday under mostly sunny skies. A brief shower suspended play in the mid-afternoon but play resumed after a delay of about half an hour.

Gaston earned one of seven qualifier berths in the 56-player main draw that starts Monday.

The Masters 1000 tournament alternates between Toronto and Montreal each year. This year's event will be back at full capacity for the first time since 2019.

This report by The Canadian Press was first published Aug. 7, 2022.