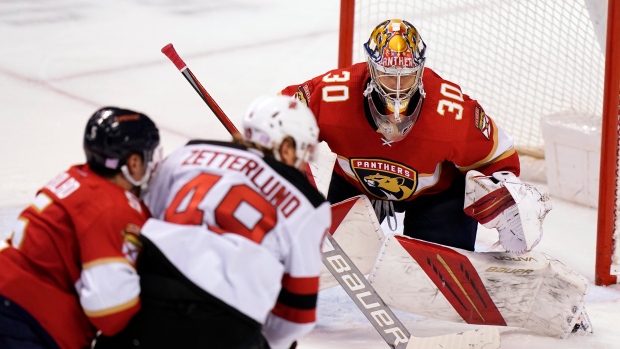 Knight, who was scheduled to be a restricted free agent next summer, will carry a cap hit of $4.5 million in each season of the new deal.

three-year deal at a $4.5 million AAV per season https://t.co/ghALixF7xs

"Spencer is a phenomenal goaltender, as well as an exceptional athlete and person," Panther general manager Bill Zito said. "He has thrived in his professional career, dedicating himself to his training through his first two seasons with our organization. With this extension, we are excited about the present and future of Panthers goaltending."

Panthers goaltender Sergei Bobrovsky is also signed through the 2025-26 season and carries a cap hit of $10 million.

Knight's new contract means the Panthers will have $14.5 million in cap space allocated towards goaltenders from 2023-2026.

With Knight now under contract for 2023-24, the Panthers are projected to have just over $11 million in cap space next summer with 16 players under contract, per CapFriendly.

The only players under contract longer than Bobrovsky and Knight for the Panthers are forwards Aleksander Barkov ($10M AAV) and Matthew Tkachuk ($9.5M AAV), who are both signed through the 2029-30 season.