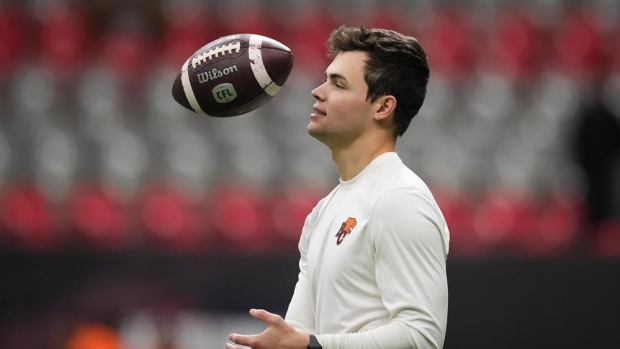 Rourke, the CFL's top Canadian last season, signed a three-year deal Sunday with the Jacksonville Jaguars. The 24-year-old Victoria native spent his first two seasons of pro football with the B.C. Lions after being bypassed in the 2021 NFL draft.

Sophomore Trevor Lawrence, drafted first overall in 2021, is firmly entrenched as Jacksonville's starter. But Trestman, a former CFL and NFL head coach, said Rourke will benefit from not only watching Lawrence but also the coaching he'll receive from head coach Doug Pederson and assistants Mike McCoy and Henry Burris, all former pro quarterbacks.

"I think he's in a really good place with Doug, Trevor, Henry Burris and Mike McCoy," Trestman said. "I think that's a really good quarterback room to be in.

"I've watched Nathan Rourke, he's an outstanding quarterback. It's much more difficult to play quarterback in the CFL, in my opinion, than it is in the NFL because of the motions and pre-snap things that are done. I just look at him as a quarterback with tremendous ability. He's highly accurate, he can move, he's got escapability. There's a reason why he had 12 workouts. He's a talented player who went to Canada and showed he can play."

Burris, a three-time Grey Cup champion and Canadian Football Hall of Famer, is in his first season as an offensive quality control coach with Jacksonville. Burris was hired as an offensive consultant with B.C. last March but resigned shortly afterwards to join the Jaguars.

McCoy, a former Calgary Stampeders' quarterback and NFL head coach, is Jacksonville's quarterback coach. The Jaguars were one of dozen teams Rourke met with following the CFL season.

The six-foot-two, 209-pound Rourke was the CFL's top Canadian despite being limited to 10 regular-season starts after requiring surgery for a Lisfranc sprain in his right foot. Still, Rourke completed 255-of-324 passes (league-high 78.7 per cent) for 3,349 yards with 25 touchdowns and 10 interceptions while rushing for 304 yards and seven TDs.

Rourke led B.C. (12-6) to a 30-16 West Division semifinal win over Calgary before the Lions' season ended with a 28-20 loss to Winnipeg in the conference final.

"What Trevor Lawrence taught all young quarterbacks is you just play one play at a time," Trestman said. "You don't get caught up in the mistakes you made, you don't think too far ahead, you don't listen to the voices in your head … that's a sign of great mental toughness.

"What Trevor Lawrence had to do is the same thing Doug Pederson had to do. Just call one play at a time and let the game take its course. Having a head coach who's played the position, who's had success coaching quarterbacks, who's won a Super Bowl for gosh sakes, is certainly invaluable."

Rourke has been successful in the American game. He was a three-year starter at Ohio (2017-19), passing for 7,475 yards and 70 TDs while leading the school to three straight bowl victories.

But Rourke's CFL experience will also be an asset.

"I've always said the difference between some of the CFL players and NFL players, it's really credit card thin," Trestman said. "It's being in the right place with the right people and sometimes it's being able to play special teams. If you can't play special teams and you're a third or fourth receiver, you're not going to make the team, that type of thing.

"I felt Anthony Calvillo and Ricky Ray had a chance to play in the NFL and that in the right environment they would've been just as successful as they were in Canada. You can't tell me that a Jamel Richardson, an S.J. Green or a Ben Cahoon couldn't have played in the NFL."

Both Calvillo and Ray are Canadian Football Hall of Famers while Richardson, Green and Cahoon were CFL all-star receivers.

These days, Trestman, 67, serves as an adjunct professor at the University of Miami Florida School of Law and co-hosts The Leadership Gameplan, a biweekly podcast through the school that's on Spotify.

This report by The Canadian Press was first published Jan. 17, 2023.