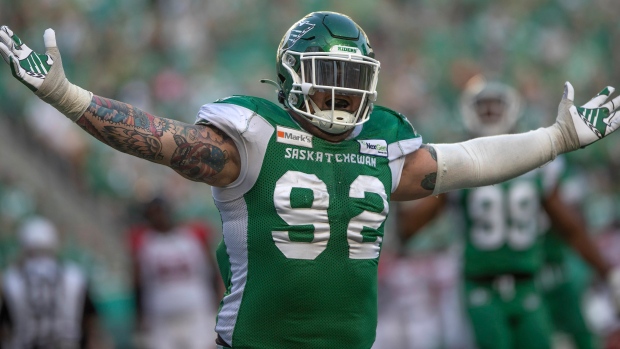 Garrett Marino will not be appealing his four-game suspension.

The Saskatchewan Roughriders defensive lineman issued a statement and apology on Wednesday, a day after receiving the CFL's largest ever suspension in the wake of Friday's incidents involvin Ottawa Redblacks quarterback Jeremiah Masoli.

"I want to apologize for my actions that day, as I understand that they have no place in the game of football," Marino said in his statement. "I also apologize to Jeremiah Masoli of the Ottawa Redblacks, as I did not intend to injure him. I have tried over the past few days to connect with him directly and will continue to do so.  Regarding the comments I made during the game, I regret that I said them, as I now understand their consequences. This was not my intent when speaking on the field, nor is It ever my intent in my day-to-day life.  I know I play the game with an edge, and during the game I made an insensitive and culturally stereotypical remark. I now understand this was hurtful to my peers and I hope I can be forgiven for that misunderstanding.

"I take pride in being a good teammate and a valued member of the Saskatchewan Roughriders Football Club. I did not intend for my comments or actions to be hurtful, and I take solace in my teammates, knowing that I stand with all of them, regardless of race, ethnicity, or sexual orientation.  I will not be commenting on this matter again but will be working to better myself as I serve this discipline and prepare to rejoin my teammates on the field."

During Friday's game, won 28-13 by the Riders, Marino hit Masoli low in the fourth quarter and then flexed his muscles to the home crowd. Masoli, in his first season with the Redblacks, needed to be carted off the field and is expected to miss 10-12 weeks.

While Marino claims to have attempted to contact Masoli over the past days, a Tuesday statement from the former Oregon Ducks pivot said otherwise. Masoli also took particular umbrage with racial remarks made to him by Marino.

"The worst of it is the vile and disrespectable type of behaviour and racial insults that were made toward me more than once," Masoli, who is of Samoan descent, said on Tuesday. "In the CFL we say our diversity is our strength, so there should be no place for the racial hate.

"It's sad that the hate, racist attitudes and racial insults are going to be punished with a slap on the wrist. One game for racist insults is simply not enough in my opinion and hopefully we can use this to promote growth and change for the better. We need to protect the integrity of the game."

Later on Wednesday, the Riders also released a statement, apologizing to Masoli, and vowing to make a donation in his name.

"The Saskatchewan Roughriders extend its sincerest apologies to quarterback Jeremiah Masoli and have expressed those apologies to several members of the Ottawa Redblacks," the statement red. "We wish him a smooth and speedy recovery.  The comments and actions of Garrett Marino on July 8th do not represent who we are as an organization or the work we do in the Saskatchewan community.  The club will be making a donation to the Redblacks Mentorship Program in Jeremiah Masoli's name. The program connects at-risk youth who have experienced racism and discrimination with mentors and provides encouragement, support. guidance, and strategies for youth to reach their Fullest potential."