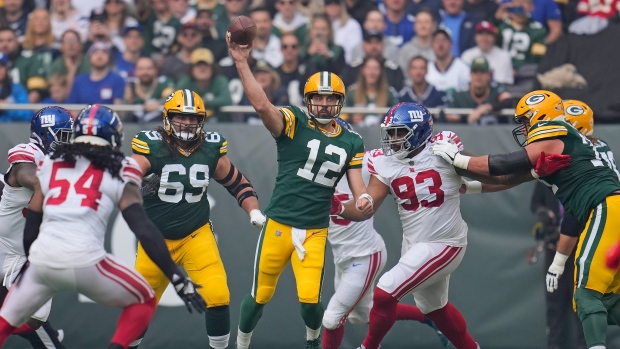 Green Bay Packers quarterback Aaron Rodgers confirmed Wednesday that the thumb on his throwing hand has been broken since the final play of a Week 5 loss to the New York Giants in London.

Still, the soon-to-be-39-year-old pivot says he's has ruled out surgery, both now and after the season.

Aaron Rodgers confirmed today his right thumb has been broken since Week 5, when the injury happened on the last play in London.

Here he is talking about it for a bit. Surgery has never been a thought and it won’t be after the season, either, he said. pic.twitter.com/FbbMOkXYtc

"I think I've had worse injuries I've played with," Rodgers said ahead of Sunday night's game against the Philadelphia Eagles. "It's definitely a challenge, but the days off helped. I'm feeling better this week."

The Packers last played last Thursday in a 27-17 loss to the Tennessee Titans and sit 4-7 on the season.

Rodgers says a finger injury sustained at Cal was more difficult to deal with than a broken thumb.

"When I broke my index finger in college, that was probably a slightly more important finger to deal with," Rodgers said.

A four-time MVP, Rodgers is in his 18th season.