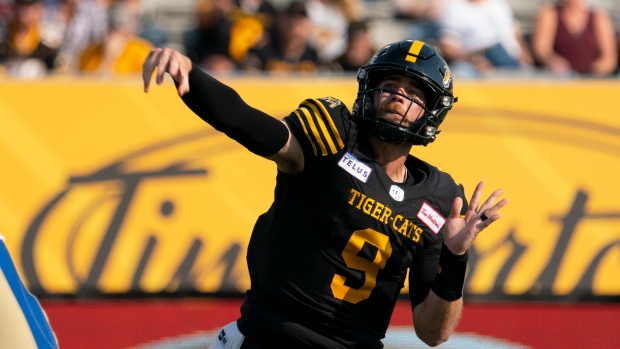 HAMILTON — Dane Evans and the Hamilton Tiger-Cats could give their playoff hopes a boost by continuing their trend coming off a bye week.

Hamilton (4-10) hosts Saskatchewan (6-9) on Friday night in a game that's important to both clubs. The Roughriders are fourth in the West Division but have two more wins that the Ticats, who're third in the East.

A win Friday would put Saskatchewan three wins ahead of Hamilton with the home team having just three regular-season games remaining. The Ticats would then have to win out and have the Riders drop their last two contests versus the Calgary Stampeders (10-5) to make the playoffs.

According to the CFL, that would be a one in 32 probability, or a three per cent chance.

With a victory, Hamilton would pull to within a win of Saskatchewan with a game in hand. In that scenario the East Division team would need only three of those five games to go its way (any combination of Ticats wins and/or Saskatchewan losses) to secure the final East Division playoff spot.

Again, according to the CFL that probability would only be one in eight (12 per cent) but it improves four fold compared to if Riders emerge victorious.

Hamilton visits Calgary on Oct. 14 and ends its regular season with a home-and-home series against the Ottawa Redblacks (3-11). So the Ticats have an opportunity to erase the disappointment of a roller-coaster '21 campaign.

"That's the beauty of sport, especially the beauty of the East Division this year," Evans said. "It's kind of been just a weird year altogether but that doesn't really matter anymore.

"These next couple of games, especially this one (Friday), really matter and I think we're ready for it. As a competitor, you play the game to win and that's all we have to do ... so let's win."

The Ticats are coming off a disappointing 23-16 road loss to Montreal on Sept. 23, a defeat that prevented them from entering their final bye week in second in the East Division. But twice this season Hamilton has emerged victorious coming off the bye.

"I can't pinpoint it," Ticats head coach Orlondo Steinauer said. "I just know everybody is fresher, you have great energy.

"I'm not sure what the true analytics are for teams coming off the bye week but in our case we hope it bodes just as well as the last one."

Saskatchewan has dropped four straight, including last week's 31-13 decision to the Winnipeg Blue Bombers. Quarterback Cody Fajardo was 26-of-38 passing for 307 yards with an interception and was also the Riders' rushing leader with 36 yards and a TD on nine carries.

"They're a good offence," said veteran Ticats defensive back Ciante Evans, who returns after missing five games with a hand injury. "Their quarterback does a good job of extending plays and giving his receivers extra time to get open if the first read isn't there.

"They do a good job of controlling how they want to move the ball, whether it's with the run or pass. It's a good offence, we're going to have our hands full."

Fajardo has played the vast majority of the season with a knee injury but is fifth in CFL passing (3,101 yards) with 14 TDs and 11 interceptions. He has also run 74 times for 320 yards (4.3-yard average) with eight touchdowns.

This marks the second meeting of the season between Hamilton and Saskatchewan. The Riders took a 30-13 season-opening decision July 11 in Regina, registering eight sacks in that contest.

Hamilton's offensive line will remain intact for a third straight game, having surrendered just one sack the last two contests.

"I'm extremely confident that we'll be better than we were that week out there," Steinauer said. "If we want any chance to win we're going to have to protect the quarterback."

The Riders' defence is ranked eighth overall in offensive points allowed (25.5 per game) and last in net offence (378.7 yards). But the unit is second in the CFL in sacks (38).

"They're aggressive, whether they're playing man or zone or whether you're talking about the back end, D-line or linebackers," Evans said. "Their strength is their aggression and I think we're prepared for it."