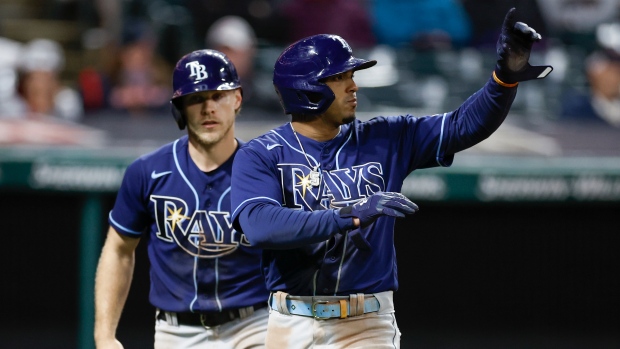 The Rays closed within 1 1/2 games of Toronto for the wild-card lead.

Ramírez, who played 99 games for Cleveland last season before being released, pulled a 1-2 pitch from Trevor Stephan (6-5) down the left-field line for his second double of the game to score Taylor Walls and Wander Franco.

The clutch hit — Tampa Bay’s first since the fourth inning — allowed the Rays to open a nine-game road trip with a win over the AL Central champion Guardians.

From here out, every game is big for Tampa Bay.

Javy Guerra (2-0) pitched one inning for the win, and Calvin Faucher, Tampa Bay’s ninth pitcher, worked the 11th for his first career save.

Rays starter Corey Kluber lasted just four innings in his third career start against the Guardians, his team from 2011-2019. It was the right-hander’s first start as a visitor in Cleveland, where he won two Cy Youngs.

While they’re focused on a snagging one of the three wild-card spots, the Rays are also keeping an eye on Hurricane Ian as it bears down on Florida.

Before the opener, Tampa’s players and coaches monitored things back home.

The Guardians clinched their division title on Sunday in Texas, but a pregame threat of rain forced the team to postpone a flag-raising ceremony to celebrate its unexpected title until Saturday.

It’s nothing new for the Guardians, who have been rained out 10 times at Progressive Field.

Following a 23-minute rain delay in the second, José Ramírez put the Guardians up in the third with an RBI triple. Cleveland has tripled in five straight games, the club’s longest streak since a five-gamer in 1968.

The teams could meet again in October, which would pit managers and good friends Cash and Terry Francona against each other.

Cash was Cleveland’s bullpen coach under Francona in 2013-14, and the two are close.

“He’s one of the most special people in my life, and they’re either going to be happy or we are,” Francona said maybe seeing the Rays again. “It’s hard when you care that much about people and then you’re kind of fighting to beat their brains out.”

Rays: 3B Yandy Díaz (left shoulder) grounded out as a pinch-hitter in the 10th after being sidelined since Sept. 19. Cash is hoping to get him in the starting lineup Wednesday.

Guardians: Plesac (broken hand) threw a bullpen and is expected to make his first start since Aug. 27 on Friday. Plesac got hurt punching the ground in frustration after allowing a homer in Seattle.

Rays: RHP Tyler Glasnow, Tampa Bay’s No. 1 starter, returns from Tommy John surgery to make his first start since June 14, 2021. Glasnow will be on a pitch count, but the Rays are hoping he can help them in the postseason.