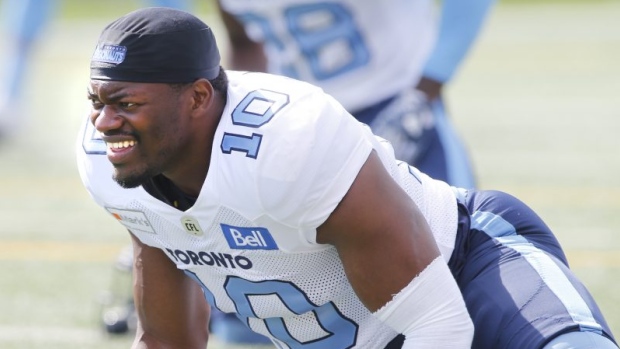 Veteran Canadian linebacker Henoc Muamba was a full participant in practice. He didn't practise Tuesday due to an abdominal ailment and was limited Wednesday.

So all signs point to Muamba playing Saturday night when Toronto (7-5) visits the Ottawa Redblacks (3-9). The Argos can cement a CFL playoff spot with a victory.

"We'll see," Dinwiddie said. "I know he felt pretty good (Thursday) but we're not out there banging, doing any of those things.

"He's got to feel really good about it. We'll probably talk more (Friday)."

But Muamba left little doubt that anything short of a broken leg won't keep him out of the lineup Saturday.

"It's always like that for me but games are becoming more and more meaningful and that's how you like it," Muamba said. "This is a time of the year when you want to play these type of games.

"I relish these opportunities. I'm not taking any of these games for granted at all so I'm excited to be out there."

Veteran defensive lineman Ja'Gared Davis (knee) was also a full participant Thursday after going on the six-game injured list in August. Dinwiddie expects Davis to be a game-time decision.

If Davis does play, it likely will be with a knee brace.

Dinwiddie said veteran Canadian fullback Declan Cross (ankle) will suit up against Ottawa, which should help both Toronto's rushing offence and special teams.

"He brings a little bit of toughness to us in the downhill run game as far as blocking the edge," Dinwiddie said. "He's also great on punt protection and kickoff returns, we missed him on special teams as well."

Australian punter John Haggerty (hip) will be a game-time decision. If he can't go, veteran kicker Boris Bede will also handle punting duties, something he's done throughout his CFL tenure.

Injuries, Dinwiddie said, are just a fact of life in professional football.

"We just say, 'Next man up,' that's kind of our motto," he said. "You're going to deal with injuries week to week and sometimes they're going to happen at the end of the week and you've got to live with it.

"That's kind of how we roll, right, and kind of what we did last year."

American defensive lineman Damontre Moore is completing his first week of practice with Toronto. The 10-year NFL veteran signed with the Argos on Sunday and said his new teammates have helped him adjust to the nuances of Canadian football.

"But at the end of the day football is football," Moore said. "You see ball, you get ball.

"The first day I got out there and it felt a little shaky but by the end of practice I was humming just like I've been here with the guys all training camp. That's a testament to having a great coach (defensive coordinator Corey Mace) teaching me and the guys being unselfish (and) taking me under their wing."

However, the six-foot-four, 260-pound Moore couldn't say if he'll be playing Saturday.

"Hey man, we'll see what happens," he said with a chuckle. "Time will tell.

Toronto comes in having won three straight, including a 24-19 decision in Ottawa on Sept. 10 before both teams headed into a bye week. The Argos' defence hasn't allowed more than 20 points over the current win streak and a combined 47 points over that span.

"Specifically on defence … we either start fast and don't finish strong or we start slow and finish strong. We want to be able to put full games together because we don't want to give up opportunities or a chance for the opposing offence to stick around. We don't feel like we've done that so far."

Dinwiddie doesn't want his team dwelling upon the playoff implications of Saturday's contest.

"We've just been talking about the process," he said. "I told the guys, 'Don't even look at the standings.'

"We started off after the first nine weeks and said, 'Now it's a new season,' and we're 3-0 now trying to get to 4-0. We just take it one day at a time … understanding we've got work to do to be able to prepare on game day."

This report by The Canadian Press was first published Sept. 22, 2022.