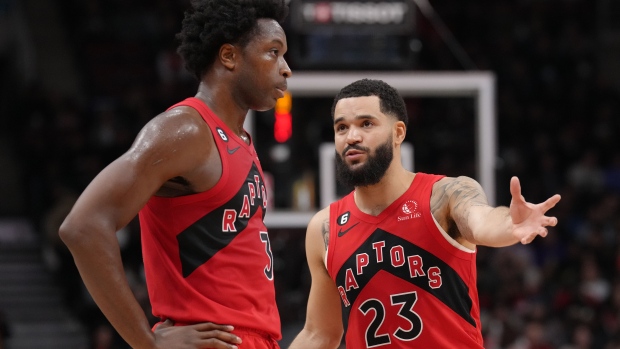 O.G. Anunoby and the Toronto Raptors look for back-to-back wins as they host Jayson Tatum and the Boston Celtics on Monday night.

You can watch the game LIVE on TSN4/5 and streaming on TSN.ca and the TSN App with coverage starting at 7pm ET/4pm PT.

The Raptors are coming off a 121-108 victory over the Orlando Magic on Saturday after they lost back-to back games against the New Orleans Pelicans and Brooklyn Nets earlier in the week.

Anunoby had a game-high 32 points on Saturday while Scottie Barnes recorded a double-double with 17 points and 14 rebounds.

Toronto sits in seventh place in the Eastern Conference with a 12-11 record and are 5-5 in their last 10 games.

The Celtics are on the second half of a back-to-back after they defeated the Nets 103-92 on Sunday night.

Boston is led by 24-year-old superstar Tatum who sits fifth in the NBA averaging 30.7 points per game while also leading the Celtics with 8.1 rebounds per game.

The Celtics sit at the top of the Eastern Conference with a 19-5 record and are 8-2 in their last 10 games.