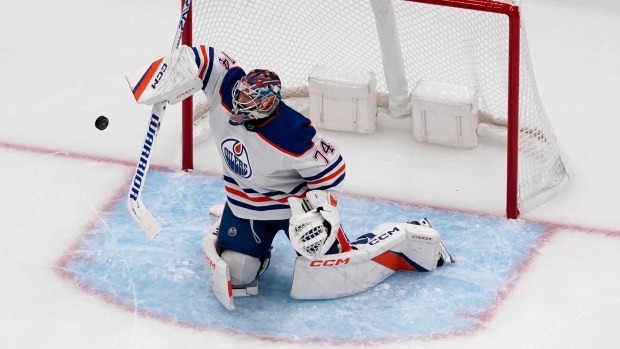 Stuart Skinner will make his third straight start in goal when the Edmonton Oilers host the Arizona Coyotes on Wednesday.

The Oilers beat the Montreal Canadiens 5-3 on Saturday and fell 3-2 to the Washington Capitals on Monday.

TRANSACTION: The #NHLJets have reassigned F - Dominic Toninato to the Manitoba Moose (AHL).

The 21-year-old from Duluth, Minn., has skated in four games with the NHL club this season, recording an assist. Toninato has played in one game for the Moose.

The Vancouver Canucks aim for their third straight win as they visit the San Jose Sharks.

Spencer Martin will get the start in net for Vancouver and will be making his seventh appearance in the Canucks' last eight games.

Martin was pulled from the Canucks' 7-6 win over the Montreal Canadiens on Monday after giving up four goals in the first period.

Line at morning skate, as per TSN's Farhan Lalji:

The Chicago Blackhawks assigned Lukas Reichel to the Rockford IceHogs of the American Hockey League, the team announced Wednesday.

At the AHL level, the native of Nuremberg, Germany, native and first-round pick (17th overall) in the 2022 NHL Draft has skated in 19 games, scoring 10 goals and recording 23 points.

Word from #CBJ is Joonas Korpisalo goes in net tonight vs. Buffalo. There are some gametime decisions to be had so some other things are up in the air.