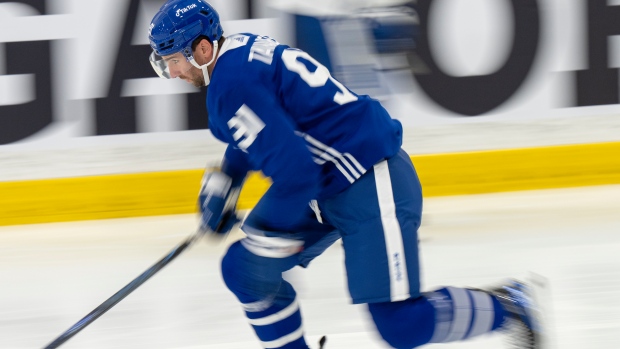 Per head coach Sheldon Keefe, Leafs' centre John Tavares has an oblique strain and will be out at least three weeks.

According to The Athletic's Harman Dayal, Canucks defenceman Travis Dermott sustained an injury during practice and needed to be helped off the ice and into the trainer's room.

Travis Dermott, shaken up and in obvious pain, being helped down the tunnel #Canucks

Head coach Bruce Boudreau indicated that Dermott was shaken up after a hit and felt "woozy" - he did not return to practice.

The Florida Panthers have agreed to a three-year contract extension, worth $13.5 million, with goaltender Spencer Knight, according to a press release provided by the team.

Knight, who is 21 years old, set the franchise record for wins in a single season by a rookie last year, with 19.

Wright was selected fourth overall at the NHL Entry Draft in June. Eberle skated primarily on the top line for Seattle last season, indicating Wright may see a prominent role for the Kraken.

Additionally, the power play unit in practice featured Schwartz, Wright, Eberle as forwards and Jared McCann and Vince Dunn as the defensive pairing.

David Quinn spoke after the Sharks most recent practice and provided an update on a few battles unfolding for roster spots this preseason, including the final spot on the powerplay line.

Defenceman Kevin Labanc, who appeared in 21 games last season for the Sharks and totaled three goals and six points, has the position unless he plays poorly in camp.

The NHL season kicks off in just over two weeks, and training camp rosters are on the brink of being cut down to the regular season size.

The Athletic's Aaron Portzline identified some roster locks and players fighting for a spot in training camp over the next two weeks.

Veteran James Neal has a chance to claim a roster spot with a strong showing in camp, and two Russian forwards in Yegor Chinakhov and Kirill Marchenko are not locks to make the roster, but would be difficult to send to the AHL given they ditched the KHL to come to the United States and play.

Broberg not a lock for Oilers roster this season

As per The Athletic's Jonathan Willis, it seems likely that Edmonton Oilers' Philip Broberg, who was drafted with the eighth overall pick in the 2019 NHL Entry Draft, will be on the team at the start of the season but may not stay there long.

Broberg is almost certainly going to be on the opening night roster for cap reasons, but there's no guarantee he stays there.

Switching him out for one of the other D (Murray, Nemo, Samorukov) would open up enough money to recall Shore, and that's a plausible Game 1 outcome.

The Athletic's Daniel Nugent-Bowman added that if Broberg were to start the season in the AHL, it would be because of a poor pre-season effort.

Boeser injury opens up a difficult choice for Canucks

As detailed by The Athletic's Thomas Drance, the Vancouver Canucks have mulled roster options to replace forward Brock Boeser, who is likely to miss three-to-four weeks while recovering from hand surgery, but no clear favourite exists at this time.

Nils Hoglander seems like an obvious replacement given his strong performance in camp, but the team is not sold on his defensive ability enough to put him in that role. Because the line makeup calls for a tougher forward that can provide scoring and defence,

there isn't a strong fit on the roster as it stands. Other options include Vasili Podkolzin, Connor Garland and Andrei Kuzmenko, though they all have different faults.

Stars announce first round of cuts

The Dallas Stars announced their first round of cuts, sending each player back to the minor leagues, and terminating the tryout contracts of Logan Morrison and Jacob Murray.

Dallas Stars first round of cuts.

18-year-old goaltender Dominic DiVincentiis was a second-round pick in this year's NHL Entry Draft, and Danny Zilkin was a third-round selection.