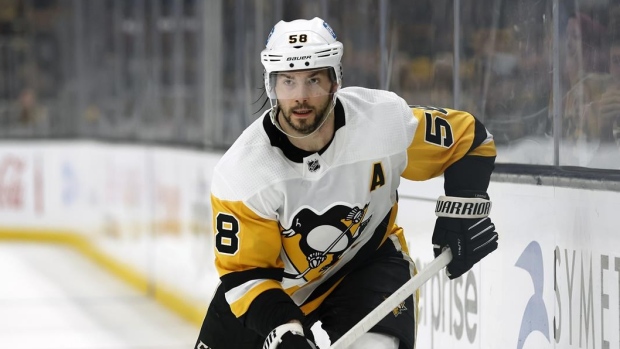 Defenceman Kris Letang is practising with the team this morning in a regular yellow jersey 10 days after suffering a stroke.

Letang suffered the stroke last Monday and briefly skated last Thursday. He skated in full gear on Tuesday morning prior to the team's session.

The 35-year-old missed over two months of the 2014 season due to a stroke. At the time, testing revealed that he was born with a very small hole in the wall of his heart. He has played 543 regular season games and 69 playoff games since his initial stroke.

He has one goal and 12 points in 21 games this season.

In 17 seasons, all with the Penguins, Letang has scored 145 goals and added 517 assists in 962 regular season games. He is the franchise's all-time leader among defencemen in regular season and playoff games played, goals, assists and points.

Dr. Vyas on Letang: "His stroke this time was much smaller than it was last time. His symptoms have resolved a lot quicker than they did the last time as well. We know what to expect - the data has also evolved in terms of how this hole (in his heart) is to be treated."

His stroke this time was much smaller than it was last time. His symptoms have resolved a lot quicker than they did the last time as well. We know what to expect - the data has also evolved in terms of how this hole (in his heart) is to be treated," said Vyas.

As for if playing will come with any risk for Letang, Vyas does not think there is any.

Dr. Vyas on Letang: "Certainly it is not the sport that created this problem for him... We don't think that playing the sport itself is risky for him."

"Certainly it is not the sport that created this problem for him... We don't think that playing the sport itself is risky for him," Vyas said.

Ahead of their game against the Los Angeles Kings, TSN's Claire Hanna shared the Leafs expected lines:

Sheldon Keefe on how much Brodie is expected to play: “Probably haven’t had as much practice time as we would like him to have. He did get the one the other day with us in Dallas - he’s probably ready to go. We’ll ease him into it and get him back up to speed. It’ll be nice to have him back.”

For Brodie, the biggest challenge about coming back is “the mental side of it. Trying to get back in the game - it’s hard to replicate in practice that mindset. Definitely that - just trying to be a leader out there and make the right reads. Try to see the game.”

Brodie will be playing alongside Conor Timmins who is playing in his first home game as a Maple Leaf (12th defenseman to play for the Leafs this season).

The two have never played together and skated on a pair for the first time this morning.  “Took some reps - it’s good to get that in. We haven’t played together. To get that in in practice and try to figure each other out it’s important.”

Rasmus Sandin (23:26mins) and Timothy Liljegren (25:57mins) both played the most minutes in a game of their NHL careers on Tuesday in the win vs. Dallas with Morgan Reilly, Jake Muzzin and TJ Brodie out.

Mark Giordano thinks that will pay off in dividends down the road, “It’s huge for defenseman in the NHL it’s all about experience - they stepped up and played in a huge role in the last little bit and looked good doing it. For them that’s going to give them confidence going forward and they know they can play in any situation against anyone and be effective.”

Giordano started the season in the 13-20min range per night but has been playing 22mins + in 7 of the last 8 games. He doesn’t mind, “We love it. You get out there, you forget about your mistakes quick when you’re going out a lot. No one is every going to complain about playing more minutes that’s for sure.”

However Giordano recognizes how big the addition of Brodie back is: “You bring a guy whose obviously a top defender in the league back into your lineup it’s huge for your team. We’ve missed him. I think we’ve done a good job when he was out to eat those minutes as a committee. A guy like Brodes you don’t replace. He’ll take a lot of minutes out there and big for our team.”

Keefe on the opponent: “We learned that they’re a strong defensive team. Make it hard to get to the net. They have a lot of depth at forward and defense. In terms of production from the 4th line, I think it’s at 11G on 5 on 5 just from their 4th line. That’s as good a production from any team in the league. Their PP in the last 10 games has been by far the best in the NHL. That gives them confidence and gives them a real boost offensively. There’s a lot to handle for sure. We feel our game is in a good place too and we’re ready to take on any opponent but certainly this team comes with challenges.”

Forwards Jonathan Drouin and Mike Hoffman will practise with the team today in non-contact jerseys.

Jonathan Drouin and Mike Hoffman will practice with the team today (non-contact jerseys).#GoHabsGo

Drouin has not played since suffering an upper-body injury against the Vegas Golden Knights on Nov. 5. He was projected to miss four-to-six weeks with the injury. He has four assists in 12 games this season.

Hoffman was placed on the injured reserve on Dec. 1 and has not suited up since Nov. 19 due to a lower-body injury. In 16 games this season, the Kitchener, Ont., native has scored five goals and added three assists.

The Habs are back in action Saturday night against the Los Angeles Kings.

The Calgary Flames have recalled forward Matthew Phillips from the Calgary Wranglers of the American Hockey League.

#Flames General Manager Brad Treliving has announced the recall of forward Matthew Phillips from the @AHLWranglers.

The 24-year-old Calgary, Alta., native has played in 20 games for the Wranglers this season, scoring 15 goals and recording 30 points.

Phillips was named the AHL Player of the Month in November for his 18 points.

The Flames' next game is Friday against the Columbus Blue Jackets at Nationwide Arena.

The 24-year-old from Waterloo, Ont., was placed on injured reserve with a broken foot in early November.

Stanley played in five games prior to his injury.