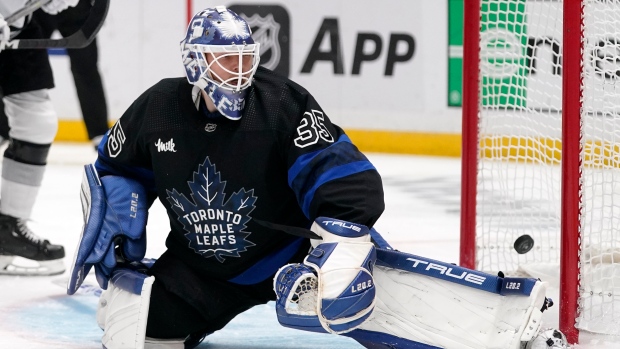 Ilya Samsonov was the first goaltender off the ice at Maple Leafs practice on Wednesday and he is projected to start tonight's game against the San Jose Sharks, according to TSN's Mark Masters.

Ilya Samsonov is the first goalie off at Leafs skate

He has not played since sustaining a knee injury against the Boston bruins on Nov.5.

Additionally, the Maple Leafs have returned goaltender Erik Kallgren to the AHL's Toronto Marlies to make room for Samsonov.

The @MapleLeafs have activated G Ilya Samsonov from injured reserve.

G Erik Källgren has been loaned to the @TorontoMarlies.

Cam Talbot starting in net for the #Sens tonight.

The Senators also provided an update on forward Josh Norris, who skated Wednesday by remains without a timeline to return from a shoulder injury.

The Canadiens practiced in Montreal prior to flying to Calgary to begin a four-game road trip. The practiced with the following lines:

Brendan Gallagher and Sean Monahan did not practice and were given maintenance days. Juraj Slafkovsky practiced in Gallaghers second-line spot while defenceman Arber Xhekaj filled in for Monahan on the third line.

Jesse Puljujarvi was dropped to the second line with Ryan Nugent-Hopkins and Mattias Janmark in Wednesday's practice. Zach Hyman moves to the first line toi play with Connor McDavid and Leon Draisaitl.

Tyler Benson looks set to make his season debut after completing a conditioning stint in the AHL.

Kevin Bahl will slot in is Marino is unable to play on Thursday against the Nashville Predators.

#NJDevils have Kevin Bahl as an extra defenseman, he should end up slotting in.

Defenceman Ilya Lyubushkin (undisclosed) received clear scans on Wednesday and the team will wait to see how he responds before setting a timeline for his return. Lawrence Pilut will fill in on defence for the Sabres against the Detroit Red Wings.

Lawrence Pilut will step in tonight on defense.

Vinnie Hinostroza will be back in at forward for Rasmus Asplund.

Head coach Brad Larsen said Patrik Laine will travel with the team to Winnipeg before Friday's game against the Jets. However his status is not yet determined and will depend on how his injured ankle responds during practice.

Laine also said playing his former team will not factor into his status for Friday's game.

"It doesn't matter where it is, who we're playing against, I just want to play. ... Just hopping on the bike and watching other guys play out there, it sucks."

Patrik Laine started his career in Winnipeg, but that hasn't played into his desire/work to get back for Friday. "It doesn't matter where it is, who we're playing against, I just want to play. ... Just hopping on the bike and watching other guys play out there, it sucks." #CBJ

Laine has played in just eight games this season and has not played since spraining his ankle on Nov. 12.