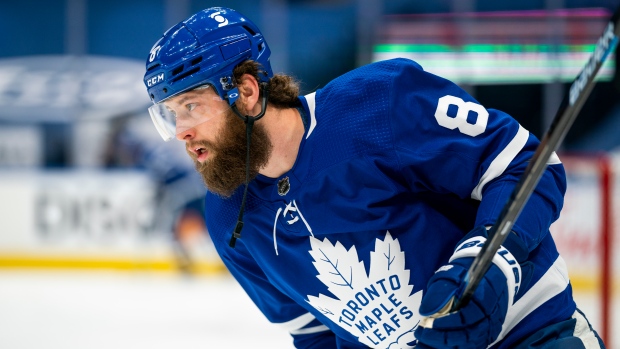 The Toronto Maple Leafs announced on Thursday that defenceman Jake Muzzin will miss the start of training camp due to back discomfort.

The Maple Leafs split up long-time teammates Auston Matthews and Mitch Marner during their first formal skate of training camp on Tuesday.

Even though #Habs Evans is listed as day-to-day with a UBI, he is still taking part in speed and conditioning skates and testing. @TSN_Edge

Anderson, 28, is out with an upper-body injury and is considered to be day-to-day. The 6-foot-3 winger registered 19 goals and 32 points in 69 games last season.

Evans, 26, is out day-to-day with an upper-body injury but he did participate in speed and conditioning skates as well as testing on Thursday. The 6-foot centre had 13 goals and 29 points in 72 games last season.

Edmundson, 29, is out indefinitely with a lower-body injury. The 6-foot-5 defenceman had three goals and six points last season but was limited to 24 games due to a back injury.

Additionally, there are no changes in the status of forward Sean Monahan and goaltender Carey Price.

Monahan, 27, was acquired by the Canadiens in August, along with a conditional first-round draft pick, from the Calgary Flames in exchange for future considerations. The former sixth overall draft pick underwent season-ending surgery in April and is expected to be ready to start the season.

Price, 35, was placed on the long-term injured reserve list on Sept. 8 due to a long-standing knee injury.

Forwards T.J. Oshie and Carl Hagelin did not participate in on-ice testing on Thursday, according to Tom Gultti of NHL.com.

Hagelin is awaiting further testing, so unknown when he'll be able to practice. Could be a while https://t.co/CtgYujuIhV

T.J. Oshie is also not participating in the on-ice testing today. He underwent an offseason upper-body procedure and as a precaution he'll wait to do the test later in camp.

Oshie, 35, sat out the testing as a precaution after undergoing an upper-body procedure in the off-season and is expected to participate in practice on Friday and do the testing later during training camp. The 6-foot winger had 11 goals and 25 points in 44 games last season.

Hagelin, 34, is dealing with an eye injury and it is unknown when he will be available to practice with the team. The 6-foot winger registered three goals and 14 points in 53 games last season.

Forwards Gabriel Landeskog, Darren Helm, Valeri Nichushkin, and defenceman Josh Manson did not practice on Thursday, according to The Athletic's Peter Baugh.

Landeskog (LBI), Helm (LBI), Manson (personal), Nichushkin (LBI) are not on the ice.

Landeskog, Helm, and Nichushkin were all out with lower-body injuries while Mason wasn't available due to personal reasons.

Forward Andrew Ladd did not pass his physical and will go on long-term injury reserve, according to Craig Morgan of PHNX Sports.

Coyotes forward Andrew Ladd did not pass his physical & will go on LTIR. His thrice surgically repaired knee is still an issue.
Per terms of the trade that brought him to AZ last summer, the Coyotes will get the conditional 2023 3rd-round pick they acquired from the Islanders.

Ladd, 36, has had his knee surgically repaired three times and continues to be an issue.

As a result the Coyotes will receive a 2023 third-round draft pick as part of the trade that sent Ladd to Arizona.

I'm told that Coyotes defenseman Shayne Gostisbehere is not skating today because he tweaked a muscle.
He is considered day-to-day.

Greenway, 25, underwent surgery for an upper-body issue during the offseason. He registered 10 goals and 27 points in 62 games last season.

Merrill, 30, sustained an arm injury during the IIHF World Championship in May. He had four goals and 20 points in 69 games last season.

General Manager Kelly McCrimmon announced on Thursday that forward Nolan Patrick will not be available for the 2022-23 season.

Patrick, 24, has been dealing with upper-body injuries that caused him to miss 57 games last season and 32 goals and 77 points in 222 career games split between the Philadelphia Flyers and Golden Knights.

Patrick was acquired by the Golden Knights prior to the 2021-22 season in a three-way trade that saw defenceman Ryan Ellis join the Flyers and forward Cody Glass and defenceman Philippe Myers join the Nashville Predators.

Patrick will join defenceman Shea Weber and goaltender Robin Lehner as players who will miss the season.

Foo, 28, played the last three seasons with the KHL's Kunlun Red Star and had 14 goals and 33 points in 48 games last season.

Demek, 19, played for the Western Hockey League's Edmonton Oil Kings last season and had 20 goals and 54 points in 55 games. The 6-foot-4 forward was drafted 128th overall by the Golden Knights in the 2021 NHL Draft.

Miromanov, 25, registered an assist in 11 games with the Golden Knights last season.