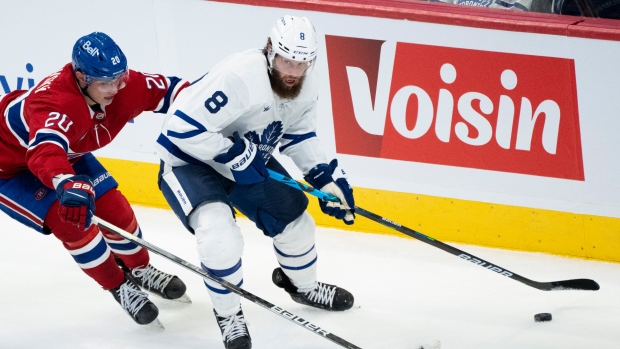 Toronto Maple Leafs defenceman Jake Muzzin is going to miss time with a neck injury and Jakob Chychrun is returning to the ice - could a deal form for the Arizona Coyotes' top trade chip? TSN Hockey Insiders Chris Johnston and Darren Dreger discuss this and more with host James Duthie.

James Duthie: Alongside the Insiders Chris Johnston and Darren Dreger, losing to Arizona was bad enough for Toronto but that's one of 82 games over and done; losing Jake Muzzin to a neck injury, considering his history - much more concerning for the Leafs. How do they handle this one?

Chris Johnston: With extreme caution... I think it's fair to say that Jake Muzzin is going to have some time here on the sidelines - look, the history is of the most concern here for the Leafs. He had two concussions within a month-long span last year, he's had a number of other injuries as well, and I think given that history the Leafs are going to take a little extra care here. Jake Muzzin had some testing on Tuesday and the expectation is it might take a few days, maybe even longer before they see how his body reacts in his recovery from this latest ailment but remember James, he missed six weeks after a second concussion last season and I would expect that there would be a lot of caution again on this one.

JD: I suppose caution is the word you could use with how Montreal handles Juraj Slafkovsky for different reasons, just in his development into an NHL hockey player - how long is he expected to stay with the big club, how long away are we from a decision on where he plays for the rest of the season?

Darren Dreger: It's a work in progress, and unfortunately for Juraj Slafkovsky and maybe for the management of the Montreal Canadiens, there is an analysis of his game on a shift-by-shift basis in the NHL. It's believed it's likely that Juraj Slafkovsky will be sent to the AHL but first they want him to develop an NHL identity. What that means is they want to see him play more North-South, they want him to use that big body, be physical, they want a better awareness of what he does when he's away from the puck so those are the qualities they're trying to instill at this point. Don't be surprised if they put him in the  press box for a game or two and let him watch - sometimes you grow into the pace of the game by doing that and they also have decisions looming because they have a lot of forwards up front but he'll get sent down eventually.

JD: Winnipeg 1-1 without their head coach Rick Bowness, his bout with COVID came on at unfortunate timing, when's he likely to be back behind the bench?

CJ: Well there's some good news here, there's actually a hope he could make his debut - at least his second time around - with the Winnipeg Jets on Wednesday in Denver. Now that requires Rick Bowness first to pass the necessary testing in order to allow him to exit COVID protocol. He would fly to  Denver on the day of the game, on Wednesday morning, and potentially be behind the bench that night and as you mentioned, yes, it was not the opportune or ideal start as the team has held its ground and he will be back this week assuming everything goes well.

JD: I think it's fair to call the Coyotes win over the Maple Leafs somewhat shocking just because of their expectations this year and the Leafs expectations even though anything can happen in a regular-season game, but perhaps moreso because they didn't have Jakob Chychrun. When does he come back and join the Coyotes and start auditioning for other teams?

CJ: Well he's going to do that now, he's joining them on the road as they're in Montreal and this is a huge step for him because look, as we all know, we've been talking about this for the past year that he would welcome a change of scenery but the feeling from the Coyotes' end of things here is that he's gotta get back playing, and playing well before that trade can manifest itself. Remember that he had an ankle injury at the end of last season, he had wrist surgery over the off-season this summer and that's what he's returning from now and there've been interested teams, but those teams want to see him play before they pull the trigger on a deal.

DD: Look, there's a growing list of Canadian teams that are in the market for a defenceman - you know, Chychrun is high-rent and the ask is tremendous, so we'll see whether the likes of Toronto, Montreal, Ottawa, Edmonton or Vancouver are going to buckle and pay that price or they'll look elsewhere. But I can tell you those are the teams that are in the market. If you look at Montreal, they're definitely looking for a right-handed shot; look at Toronto, yes, absolutely they're looking for a right-handed shot. Pierre-Olivier Joseph, of the Pittsburgh Penguins, is out there, I'm not attaching him to Montreal, or Toronto, or any of the Canadian teams, but Pittsburgh has nine defencemen. He's a young player,  a first-round draft pick, so he might be a fit with one of those clubs.

JD: Tampa Bay Lightning suspend Ian Cole after anonymous allegations on Twitter, the NHL quickly investigates and reinstates him; the Players' Association wasn't happy about this... where do they go from here on situations that may arise that are similar?

DD: As the PA acknowledged in their statement on the weekend, there will be ongoing discussions with the NHL. This was a dicey one, precedent-setting to some degree, and there's always concerns competitively speaking, I mean what if this is a playoff game and this happens? Do you take that player out of the lineup? Then more and more the gambling world, and how it's applied to the NHL is going to become a factor so it's going to be an interesting fall to see how those discussions between the PA and the league unfold.