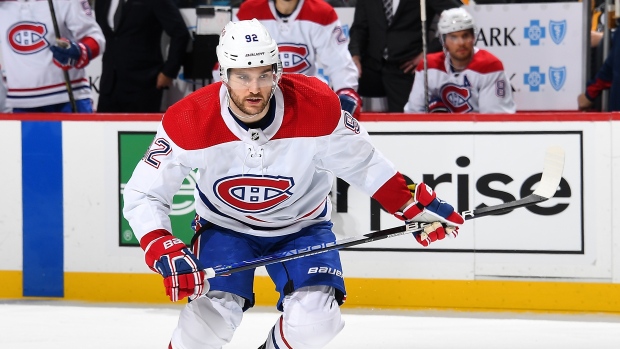 Jonathan Drouin was one of the Habs not in uniform in Montreal's home opening win over Toronto. When can we expect the centre to be back healthy and helping the Habs? After being placed on waivers, what's next for Wayne Simmonds? Which coaches are due up for extensions? TSN Hockey Insiders Darren Dreger, Pierre LeBrun and Chris Johnston discuss this and more.

James Duthie: Our second opening week edition of Insider Trading with Chris Johnston, Pierre LeBrun and Darren Dreger. We saw the Habs introduced on opening night against the Toronto Maple Leafs and Jonathan Drouin was one of those in a suit for his introduction. Two surgically repaired wrists. Dregs, when is he back and where does he fit into this young team?

Drouin focused on health and helping the Habs

Dreger: Well, he's essentially at 90 per cent. So that means virtually any day. As to where he fits in, you're right. He's still dealing with some issues. He had a bad flu in camp, so that kind of backed him off a little bit, but there has been open communication with Marty St. Louis and St. Louis has assured Jonathan Drouin that there is a fit for him in the lineup. You'll get into the regular season a little bit and find out what you have first, evaluating some of these young players, but the hope is that Drouin can get back to 100 per cent health, he can play his way into a role that is meaningful and perhaps increase his trade value for general manager Kent Hughes before the deadline.

Duthie: So he fits into their plans for now. I'm not so sure if the same can be said for Wayne Simmonds in Toronto. CJ, after he clears waivers what's next for Simmonds?
Simmonds remains in limbo while Leafs determine next steps

Johnston: Well, he remains in limbo at this point in time, it's not clear where his next game will be played. And you know what's most important to Wayne Simmonds, he still wants a chance to win the Stanley Cup, he wants to play for a contender and preferably he'd still like that to be with the Toronto Maple Leafs. But something would have to change in the Maple Leafs' situation, perhaps some injuries or something else in their cap picture to allow him to come back here and so in the meantime, he has been skating with the organization's injured players, biding his time, he's patient. He's open to a trade, perhaps to another contender, but he has to wait until there's some more clarity in his situation.

Duthie: Pierre, a couple of coaches getting extensions in Don Granato and Darryl Sutter. Who's next on that list and who might have to sweat it out a while?

Who's next after Sutter, Granato extensions?

LeBrun: Right. Well, James, we're down to four coaches on expiring deals. Should note Don Granato wasn't even on an expiring deal. He had two years left on his deal and the Sabres tacked on another two years on Wednesday. But the four guys who are pending UFAs if you will, are Peter Laviolette with Washington, Bruce Boudreau of course in Vancouver, Lindy Ruff in New Jersey and Dallas Eakins in Anaheim. The Ducks picked up Eakins' option at the end of last year. New GM Pat Verbeek I think wants to still get to know Dallas Eakins before he decides a long-term future there. My money's on Peter Laviolette being the first of those four to get an extension and you know, I think there's already been contract talks. And I believe that GM Brian MacLellan likes what he's seen from Peter Laviolette, it would not surprise me if that's an in-season extension for Peter Laviolette in Washington.

Duthie: Travis Green got the opposite of the extension last year, dismissed in Vancouver. What's he doing and what's next for Green?
Travis Green was rattled by firing, but ready to coach again

Dreger: Well, in the short term, Travis Green intends on doing some media work. Imagine that, a former coach on a panel somewhere in TV in Canada. But longer term, you know, he's going to head over to Europe, and he's going to advise for the Swiss national team while over there. He's going to spend time and he's going to perhaps investigate the workings of other clubs in Europe. But it's important to note, look, Travis Green was completely rattled by the firing of the Vancouver Canucks to a point where he needed to get away and recharge but he says, in talking to him this week, that he is recharged and he's still very hopeful that he'll be back in the NHL as a head coach soon.

LeBrun: Well, here's the thing. I mean, that Barzal extension, you're right, $9.15 million a year. Guess who represents Barzal and guess who represents Dylan Larkin? It's the same firm, CAA. So yes, I think the plan is to introduce that as a comparable in the ongoing discussions with Detroit over Dylan Larkin, who at the end of the season is a prominent UFA if it gets that far. The Red Wings obviously want to extend him. It's worth noting that Larkin's full 100 per cent no-trade clause kicked in this past July. So this is only one avenue here for Detroit, it's trying to extend Larkin at some point. I will tell you this, CAA can certainly want to bring in a comparable like Barzal but whether or not Steve Yzerman, the GM of the Red Wings, decides that's a factor, the number that he believes that Dylan Larkin should sign for that's another matter.

Duthie: And Detroit another one of those Eastern teams like Ottawa and Buffalo hoping to make a significant step forward this season.