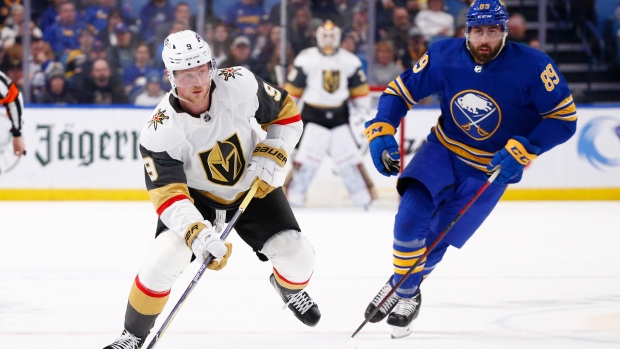 After coming off in-season surgery and later playing through a fractured thumb last season, Jack Eichel is looking to get back to his old form this season with the Vegas Golden Knights.

Eichel has been limited to just 55 games over the past two seasons due to a herniated disk in his neck and a standoff with the Buffalo Sabres over treatment of that injury, which led to his trade to Vegas. The 25-year-old centre made his season debut on Feb. 16 and posted 14 goals and 25 points in 34 games with the Golden Knights last season.

"Listen, I'm not going to make excuses," Eichel told NHL.com. "I don't think I played well last year in terms of my expectation of myself, and I'm sure the opinion of the public is probably pretty similar. They expect more out of me, and rightfully so.

"With that being said, I came off a major surgery after not playing for a year, and I had major spine surgery and played three months after and, so, that's pretty quick and, you know, like anybody that's had surgery or went through an injury, it takes a lot of time for you to get back to feeling like yourself."

Selected second overall in the 2016 NHL Draft by the Sabres, Eichel topped 20 goals in each of his four seasons in Buffalo before topping the point-per-game pace in 2018-19 and 2019-20 seasons. He appeared in just 21 games during the 2021-22 season, tallying two goals and 18 points before being shut down by his neck injury.

With a full off-season to recover, Eichel wants to return to his previous form that saw him named to three All-Star Games from 2018-2020.

"I just want to get back to feeling like myself," Eichel said. "I think just being confident every night and trying to help our team win hockey games, whether that's producing or winning faceoffs and being [strong] … in our defensive zone.

"I think there are a lot of good things I did last year in terms of away from the puck and working and maybe some areas of my game that maybe I haven't been good at in the past, but you know, I just want to get back to being that dynamic force that I was before I got hurt and I know I'll be there."