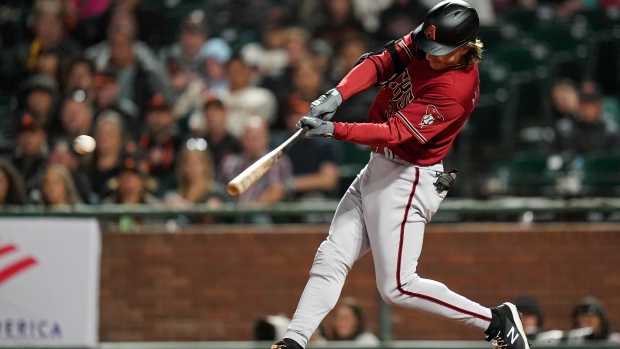 SAN FRANCISCO (AP) — Stone Garrett's father, Greg, arrived from Texas unprepared for cool San Francisco nights and had to buy a Giants sweatshirt to wear during his son's long-awaited major league debut in a much-needed win for the Arizona Diamondbacks.

That situation will be remedied soon: “We'll get him some D-backs gear,” Garrett said, noting mother Elaine brought a denim jacket and mittens.

Pinch-hitter Jake McCarthy hit a go-ahead two-run single in the eighth, Garrett had an earlier tying double, and the D-backs rallied past the Giants 3-2 on Wednesday night after two tough losses to start the series.

Garrett got his first hit in the fourth and treasured the game ball in his locker afterward as a gift that would go to his parents, given they stuck with him through eight seasons in the minors.

J.D. Davis hit a go-ahead solo homer in the sixth for San Francisco and LaMonte Wade Jr. connected in the third, but Dominic Leone (3-4) couldn't hold it to give Carlos Rodón a fourth straight winning start.

“I'm really proud of this team. Yesterday was more than a gut punch,” D-backs manager Torey Lovullo said of his team's 2-1 loss a night earlier when Brandon Crawford hit a game-ending two-run homer.

Noé Ramirez (4-3) recorded the final two outs in the seventh for the win, and Mark Melancon pitched the ninth to close it out against his former club for his 17th save.

The Diamondbacks snapped San Francisco's five-game winning streak and are just 3-19 here since Giants manager Gabe Kapler took over ahead of the virus-shortened 2020 season.

Rodón struck out 11, giving him seven double-digit strikeout games this season — the first Giants pitcher to do so since two-time NL Cy Young Award winner Tim Lincecum did so seven times in 2010 as San Francisco went on to win its first of three even-year World Series that decade.

Diamondbacks right-hander Zach Davies, facing San Francisco for the first time with Arizona, struck out six over five strong innings but is winless and 0-3 over 12 starts since a May 13 victory against the Cubs.

Garrett made his debut at age 26 and cherished the moment he had waited for his entire life.

“I wanted it bad so I just persevered and said ‘keep going, keep going, never lose faith,’” he said. “I knew if I put in the work I would eventually get here.”

An eighth-round draft pick by the Marlins in 2014, Garrett had 28 homers, four triples, 22 doubles and 95 RBIs for Triple-A Reno. He struck out his first time up Wednesday.

Lovullo said he had approached Blaser for clarification about why bench coach Jeff Banister had been tossed moments earlier for questioning what he thought was a third strike against Thairo Estrada because Blaser moved backward. Estrada wound up with a two-out triple before the big swing by Crawford.

Diamondbacks: 2B Ketel Marte was held out of the starting lineup for a third straight game with tightness in his left hamstring, but was used as a pinch-hitter in the seventh. He will work as designated hitter initially upon returning so that's part of why Garrett was brought up now. Marte said his injury is improving.

Giants: OF Mike Yastrzemski and INF/OF Thairo Estrada had a night off from the lineup given Kapler expects each of them to play the next four games, including Thursday's series finale and three straight at Colorado this weekend. Both were used in the late innings. ... RHP Zack Littell came off the 15-day injured list after missing 34 games with a left oblique strain.

RHP Zac Gallen (8-2, 2.94 ERA) takes the mound in the series finale as Arizona wraps up its seven-game road trip having gone 4-0 with a 1.14 ERA over his last five outings. RHP Logan Webb (11-5, 3.00) tries to win his third straight start for the Giants while seeking to best his career high of 11 wins from last year.