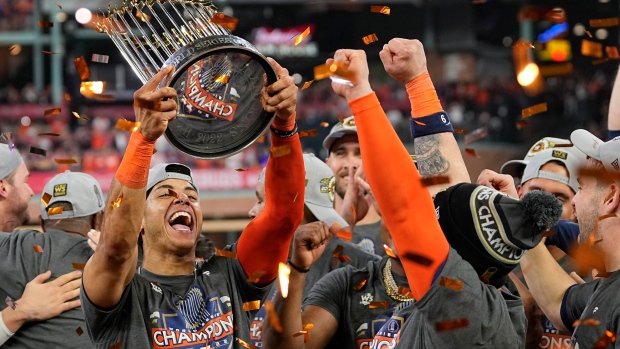 HOUSTON (AP) — Jeremy Peña has long been passionate about helping children with limited resources have access to sports.

In the wake of winning World Series MVP by leading the Houston Astros to their second championship this season, the rookie is using his newfound fame to help do more for those kids.

Peña paired last weekend with the DICK’s Sporting Goods Foundation for its Sports Matter Day, where he spoke to thousands of kids from age 6-18 who gathered at the University of Houston to participate in a day of sports fun and games and before leaving with a bag of equipment for their preferred sport.

He delighted in the reception he received from the gym full of children who rushed to their feet and shrieked as he entered. The shortstop spoke to them about his motivation for playing, pregame rituals and the importance of hard work.

Peña, who was born in the Dominican Republic, loves that his success this season has given him more opportunities to impact kids.

“When you strive to help things kind of manifest itself,” he said. “My whole life has been about giving back, giving back to the place I’ve come from. And I feel like things just multiply without me even trying."

Peña was joined at the daylong event by retired WNBA star Sheryl Swoopes, who won four titles with the Houston Comets. A pioneer in women’s basketball, Swoopes was the first player signed to the WNBA and the first to have her own athletic shoe.

She now devotes her free time to ensuring girls have opportunity and support to get involved in sports at a young age.

“I started playing ball when I was 7 and I wasn’t the most popular in school and my self-confidence wasn’t high and I had this whole body image issue,” she said. “But when I started playing sports none of that stuff mattered. And I became very confident in myself as a person, not just as an athlete.”

Kristen Garmey, the associate executive director of Sports Matter, hears stories like that every day and said her organization works to make it easier for underserved kids to play sports.

“We know that sports build character and create confidence,” she said. “It helps with teamwork. It keeps kids in school longer. It helps them aim for higher education. So, there’s all these proven benefits of sport that we really get behind to make sure that every single kid has access to playing.”

The organization invited 32 groups from across the city to the event and gave 10,000 children sporting equipment and each group a $2,000 grant to help pay for registration fees and other costs associated with sports participation.

Swoopes, who is 51, knows girls now have more access to sports than she did growing up in West Texas in the 1970s and 80s. But there’s still work to be done.

“It’s gotten better, but we still don’t have all of the opportunities that guys have,” she said. “So for me, any time I get an opportunity to give back to the community… I want to be a part of that because I’m a living example of everything that sports has afforded me."

As Peña talked to the group, many in the crowd flashed the heart hand signal that he did all season as a shoutout to his parents, but that became a sensation during Houston’s postseason run where he not only won World Series MVP but also MVP of the AL Championship Series.

“I remember myself doing the arrow like (former MLB reliever) Fernando Rodney did when he would close a game and have a save,” Peña said. “Now everyone’s doing the heart. And it’s a full circle moment. It’s special.”

And after his magical rookie season, the 25-year-old Peña is focused on helping the Astros build on this year’s success next season.

“The message got across that now we have to lock back in and show up and try to do it again,” he said.