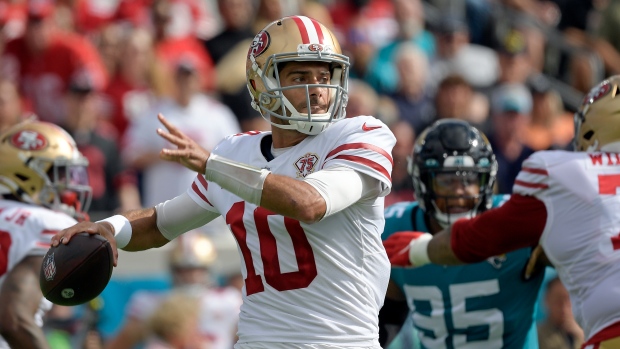 Jimmy G. isn't going anywhere after all, it seems.

ESPN's Adam Schefter reports the San Francisco 49ers have restructured quarterback Jimmy Garoppolo's contract, ensuring he will remain with the team in 2022 and will head to free agency at season's end.

Jimmy Garoppolo and the 49ers agreed to a restructured one-year contract that will keep the QB in San Francisco this season, per sources. The contract contains no-trade and no-tag clauses, assuring Garoppolo will remain in SF this season and have the freedom to leave in 2023. pic.twitter.com/2tj0dDGgN9

The 30-year-old Garoppolo had been owed $24.2 million for the upcoming season on his previous deal. With Trey Lance having been named the Niners' starter, Garoppolo had been given permission by the team to seek a trade earlier this summer.

The new deal has a base value of $6.5 million and can rise up to just under $16 million with incentives.

The Eastern Illinois product was rumoured to have been a consideration for the Cleveland Browns with Deshaun Watson set for an 11-game suspension.

Garoppolo is 33-14 as a starter over his career with the Niners and New England Patriots and has started six playoff games, including an appearance in Super Bowl LIV in 2020.