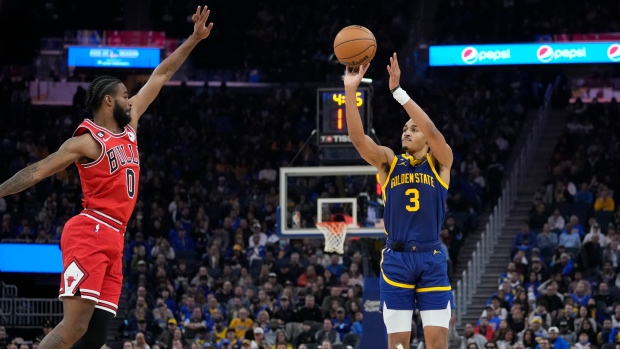 SAN FRANCISCO (AP) — Draymond Green is healthy and back to his elite level of doing a bit of everything on both ends, even leading the offense with the second unit. He just missed his first triple-double of the season.

Green is regularly knocking down 3-pointers, too.

Jordan Poole also found his groove from beyond the arc. He came off the bench to score 30 points with a season-high seven 3-pointers to take some pressure off Stephen Curry, and the Golden State Warriors beat the Chicago Bulls 119-111 on Friday night.

“The rotations changed a little bit a couple games ago, we kind of started to get a chemistry, a good rotation, and we're just out there playing our basketball now,” Poole said. “It feels really good to kind of gain our chemistry. We've just got to keep it rolling.”

Zach LaVine's 3-pointer with 2:27 to play got Chicago within 110-109 before Green answered from deep moments later on the other end.

“That was huge, one-point game at that point,” coach Steve Kerr said. “That was the shot of the game. They were the aggressor the whole fourth and we were not playing well. We had nothing going on that possession.”

Klay Thompson added 26 points with a key 3-pointer with 6:03 to play on a pass from Curry after Chicago had pulled within 105-101. Curry had 19 points, 11 rebounds and six assists playing in foul trouble. He was whistled for his sixth foul with 1:19 left but the Warriors challenged the call and were successful.

Poole shot 11 for 18 and 7 of 13 from deep, scoring 14 points in the first quarter and making four of the Warriors’ seven 3-pointers. His 3 with 1:50 remaining in the third put the Warriors ahead 92-76 and the third-year guard wagged his tongue and raised his hands in celebration before scoring again on a layup the next time down.

Nikola Vucevic had 23 points and 11 rebounds for the Bulls, who were coming off a 132-113 loss at Phoenix on Wednesday and dropped their third in four games.

Green contributed 13 points, 10 rebounds and nine assists as the Warriors returned to the Bay Area for a three-game homestand to win their ninth straight at Chase Center.

BACK IN THE DAY

Kerr and former Bulls teammates Bill Wennington commiserated over a largely forgettable boxscore from back in the day found and printed by Warriors senior vice president of communications Raymond Ridder.

It was a 110-87 Bulls road win against Charlotte on Nov. 15, 1996, in which Kerr and Wennington went a combined 0 for 6 — each missed three shots — with no points between them with Kerr playing almost 24 minutes and nearly seven for Wennington. Michael Jordan scored 38.

“Everybody can see the shooting and the shot-making and obviously I would just imagine the amount of time and preparation and work he’s put into that. But the thing to me that always stands out with him is just his stamina and endurance," Bulls coach Billy Donovan said. “You know it’s almost like he’s a marathon runner, just not going to stop. And it’s not even necessarily the hard chase, it’s the relentlessness in which he does it every single time.”

Warriors: Poole picked up a technical for celebrating while on the bench midway through the fourth. ... The Warriors have won 11 straight and 14 of 15 against the Bulls and eight in a row at home. Golden State's only better winning streak against one opponent is 11 consecutive victories vs. Cleveland. ... Golden State is 10-1 at home and the unbeaten run is the best for the team on its home floor since 11 in a row from Oct. 30-Dec. 3, 2021.

Warriors: Host Houston on Saturday night. Kerr isn't sure how many regulars will play.