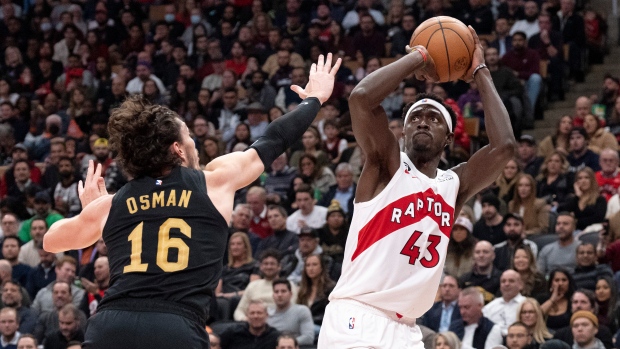 TORONTO – Nearing his return from a groin injury that sidelined him for most of the month, Pascal Siakam hit pause on one of the Raptors’ practice sessions late last week.

With his club decimated by injuries and illness and coming off a couple of hard-fought losses, the All-NBA forward gathered the group and addressed his teammates. Paraphrasing his message, he encouraged them to keep their heads up, continue putting in the work and playing hard, and, most importantly, seize this opportunity with key players out of the lineup.

“I just thought we’ve been losing, and the mood is a little off,” said Siakam, who also stuck around after that practice last Friday to work with O.G. Anunoby on his post moves.

“We have competitors out there, people that want to win. We have a lot of injuries, a lot of things happening, so it’s easy to [lose] focus. I wanted to make sure that everyone knows that we’re going through things that aren’t normal. It’s not like we have all our players and everything is great. It’s not good times, but we’ve got to stay together in those moments.”

Siakam was playing the best basketball of his seven-year career before slipping on a wet spot in Dallas and straining his right adductor muscle earlier this month. He made his return from a 10-game absence in Monday’s win over Cleveland and picked up where he left off, scoring an efficient 18 points to go along with 11 rebounds and five assists in 30 minutes of action.

While he was unable to contribute on the court for three weeks, the 28-year-old found ways to make an impact through his leadership. It’s not unusual to see a team’s best player speak up or pull teammates aside. However, it is notable for Siakam, who – by his own admission – has generally been more of a lead-by-example type.

“It is new for him, to be honest, especially in front of a group,” said Fred VanVleet, Siakam’s long-time teammate and friend, who’s always been the more vocal of the two. “He’s always pulling guys to the side and helping them, but for him to be the vocal guy – being in front of the group, stopping the huddle, stopping practice – [that’s different].”

Siakam is a relentless worker, in the mould of former Raptors star DeMar DeRozan, and like DeRozan, it’s not in his nature to be the loudest voice in the room. But also like DeRozan, with age and experience and having overcome personal and professional adversity along the way, he’s finding his own voice.

He remembers coming up with VanVleet in 2016 and learning from the likes of DeRozan and Kyle Lowry, who also had very different leadership styles. He knows what it’s like to be a young player in the league, a sponge absorbing every word from the vets in the room. Now, he’s in that position to pass along what he’s learned, and he knows that the next generation is looking to him for guidance.

That’s one of the reasons he’s made a concerted effort to be more vocal over the past couple years. Gradually, it’s something that’s become more natural. And because he’s not the type of person who speaks just to hear himself talk, his words carry more weight.

“I’m being myself,” Siakam said. “I’m never going to do something outside of who I am as a person… I don’t go around just talking all the time. I think the work and what I do as a player just speaks for itself. Sometimes that does the job more than the talking.”

“To me, it seems like it is fairly comfortable to him now,” said Raptors head coach Nick Nurse. “I’m not asking him to do it. He’s coming forward and saying, ‘Hang on a second, coach,’ or whatever. And I think he is trying to be helpful, even in one-on-one situations too. It’s good. That’s his role with the team right now. He’s one of the leaders of this team. That comes with some responsibility, and he’s taking it on gracefully.”

The great players find a way to grow and improve even when they’re away from the court. DeRozan would often cite a groin injury that sidelined him for seven weeks in 2015 as a crucial turning point in his career, a chance to study the game and see it differently. When Lowry or VanVleet have missed time over the years, they would sit in on coaches meetings and essentially serve as an extra assistant at the end of the bench.

Siakam also understands the value in making the most out of every setback. Once the initial frustration of off-season shoulder surgery – his first major injury – wore off in the summer of 2021, he went to work on becoming a better player. After missing the first 10 games of last season, he came back stronger than ever, putting together an All-NBA Third Team campaign.

“I have a lot of goals and ambitions, I’ve put a lot of work into what I do, and I have all these plans in my head,” Siakam said. “But most of the time, God is like, “I know you have this plan, but I got my own plans.’ It always happens that way, but the good thing about it is his plan is better than mine, so I just follow it and know that I’m always going to come back better than I was before.”

“I’m growing. Going through injuries kinda toughens you up. I don’t want to go through any of them, but I feel like I always learn something, and I always want to take the positive. It’s just part of it and if you’re able to get out the other side of it, good things always happen.”

Now that Siakam is back on the floor and getting healthy again, it’s easier for him – and for the team – to see and appreciate the silver lining in these past few weeks. As strange as it sounds, maybe an unfortunate fall on a slippery court can help him take the next step in his continued evolution as a leader.

“He’s our best player and it’s always great when your best player is also a leader,” VanVleet said. “We need him to have a big voice in what we do around here. Guys will respect that. He shows up and leads by example but being able to lead with your voice is also very powerful. As much as he wants to do that, I would love to have it more. He needs to do it more.”