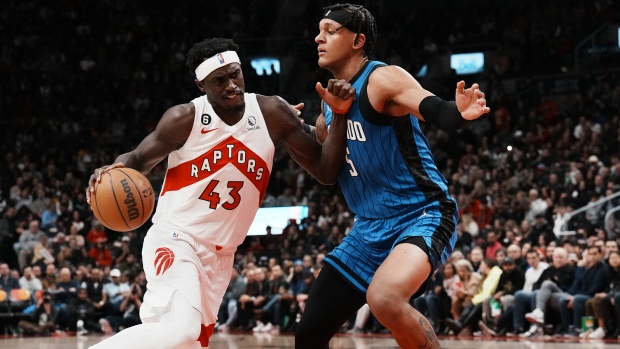 TORONTO – The Raptors had a flight to catch but that didn’t stop them from addressing the elephant in the room before heading home from Brooklyn on Friday.

While they put enough of a dent in their deficit to make the result – a 114-105 loss to the Nets – look respectable, the final score wasn’t indicative of how the night unfolded.

For the second straight game, they surrendered 40 or more points and allowed an opponent to hit at least 70 per cent of its shots in the first quarter. You might’ve expected them to respond with an inspired effort, coming off a slow start and embarrassing loss in New Orleans on Wednesday. Instead, they were worse.

Toronto trailed Brooklyn 41-17 after 12 minutes and fell behind by as many as 36 points in the opening half. Despite the late run, they couldn’t escape the hole they had dug themselves into.

They didn’t have much time to stew in their frustration either, with another game coming up 22 hours later. Orlando, who they would host on Saturday, played in Cleveland on Friday and was likely to beat them to Toronto. But before the Raptors could board the busses and battle New York traffic en route to Newark, they held a short players’ meeting in the visiting locker room of Barclays Center.

As Nick Nurse and the coaching staff stepped out, the club’s longest tenured players, Fred VanVleet and Pascal Siakam, as well as 16-year veteran Thaddeus Young led the conversation. Barely a quarter of the way into the season, nobody was panicking, but there was an understandable seriousness to the tone. This is not something they’ve had to do much in recent years.

“Nobody really likes to be harping, yelling, cussing or fussing around here so I think some things just go unsaid [sometimes],” VanVleet told TSN. “And there are times when you need to say it out loud, let people know what our standards are around here and just tighten the ship a little bit. We’re not going to win all the games, we know that, but there’s certain ways that you want to [play] every night and those two games were just unacceptable.”

The message, as Young put it was: “come out and throw the first punch.”

“When we throw the first punch it makes us a completely different team, a better team,” said the 34-year-old forward. “If we’re aggressive then we’re making sure that we have [the other team on its] heels as opposed to us being on our heels all game. Pascal and Fred, they obviously said some things, and we all just talked about making sure we’re going about this thing as a team and making sure when we step out there we’re all ready to go to battle and go to war.”

For at least one night, that message was received. Degree of difficulty caveats apply against the 5-19 Magic, but the Raptors came out like a team on a mission Saturday night.

After Siakam forced an Orlando turnover on the very first possession of the game, O.G. Anunoby made a no-look behind the back pass to Christian Koloko, whose slam dunk put Toronto on the board. Moments later, Scottie Barnes set Anunoby up for a dunk. Then, Siakam spun on 7-foot-2 big man Bol Bol and finished with the layup.

In less than four minutes, they had already hit more shots (six on seven attempts) than they did in the entire first quarter against Brooklyn (five on 21 attempts) the night before.

Coming in, the Raptors had lost 11 of their last 14 first quarters, getting outscored by 77 points over that span. On Saturday, they closed the frame with a 36-22 lead. Of those 36 points, 31 of them came in the paint or at the free throw line, with 18 coming at the rim on dunks or layups.

The eye test told the same story. Toronto was playing with the effort, energy and focus it closed Friday’s game with, intangibles that they lacked to open those contests in New Orleans and Brooklyn. This time, they were the aggressors. They set the tone. They threw that first punch.

“Energy is a big thing [for us],” Nurse said following his team’s much-needed 121-108 win. “I think that we’ve got some really good athletes out there, but they need to be firing. The energy needs to be there. The ball’s moving, guys are scoring, guys are guarding a little harder, things keep building and it all kind of comes back to energy. It’s something that we try to create with the style of play, and when we don’t have it, for whatever reason, then it’s going to be a little harder for us and we are going to look a little ordinary. But when we do have it, we look like we can really good.”

The Raptors didn’t relent after their hot start, leading by as many as 33 points in the second half and controlling the game from start to finish. It was a bounce back in more ways than one. VanVleet, who shot 1-for-14 from three-point range on the two-game road trip, finally found his rhythm, knocking down three triples. Barnes, who has often settled for outside jumpers throughout a disappointing start to his sophomore campaign, was as aggressive as we’ve seen him in weeks. All 17 of his points came in the paint or at the line, and he also grabbed a season-best 14 rebounds.

Meanwhile, Anunoby and Siakam were brilliant, combining for 58 points on just 32 shots, with 15 trips to the line. Toronto’s four-best players didn’t just lead the team in scoring, they combined for 25 of its 28 pre-garbage time assists, with each of them recording at least four.

A date with the last-place Magic couldn’t have come at a better time for the Raptors, who will see them twice more in Orlando next weekend. Still, this is a good example of something Nurse often talks about – measuring his team against itself, rather than the opponent. In this case, they weren’t deterred by the length, size and athleticism of guys like Bol or first-overall pick and early Rookie of the Year frontrunner Paolo Banchero. They attacked the rim early and often, scoring 70 points in the paint and attempting 25 free throws.

A tougher test awaits with the East-leading Boston Celtics coming to town on Monday. At 12-11, tied with Philadelphia for seventh in the conference, the Raptors continue to tread water. They haven’t dropped more than two consecutive games, but they also haven’t won more than two straight.

Their hope is that Friday’s loss in Brooklyn, and the players’ meeting that followed it, will be a turning point in their season, a moment that sets off a sense of urgency in some of the younger guys that have lacked consistency early in the campaign.

“We’ll see,” VanVleet said. “They always say ‘yeah’ and nod their head, and they’re receptive when you [have those tough conversations], but actions speak louder. So we’ll see how we fare over these next couple weeks. We haven’t been able to put together any stretches of anything, so if we put together a couple streaks that’ll show some maturity.”

“We’re concerned [about the slow starts]," Nurse said. "I also feel like we’ve had enough body of work out here where we’ve played really well. We’ve played some games where we look like dynamite and we’ve had some games where we’re not so dynamite. There’s a level of consistency you’re trying to push toward. For me, we talked about it all during that injury stretch, I’m anxious to try to start building. I felt like we were. And now we’ve got to keep working toward building again. We’re always building. We’re too young not to be building still."