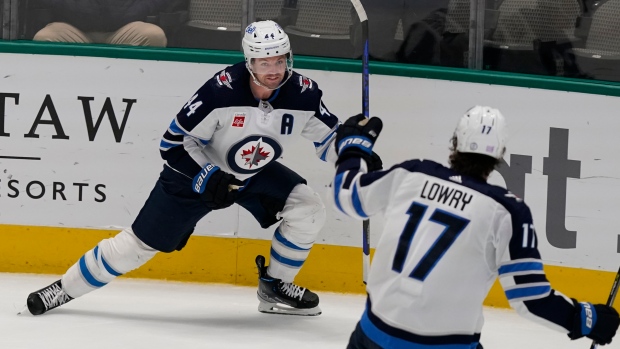 DALLAS (AP) — Red-hot Jason Robertson tied it for Dallas with two goals in the last 2:12 of regulation, but Winnipeg's Josh Morrissey scored 34 seconds into overtime to give the Jets a 5-4 victory over the Stars on Friday night.

The Jets pulled two points behind Central Division leader Dallas and out of a tie for second place.

Robertson set a Stars' record in the fast-paced first period with at least a point in 16 consecutive games when he assisted on a power-play goal by Jamie Benn. Robertson's two late goals gave him the NHL lead with 18. He has eight goals and nine assists in the last six games.

“We got a good stop down low,” Morrissey said. “I knew it was (Dallas defenseman Miro) Heiskanen below the goal line and I tried to take off. Robertson was kind of flat-footed and (Wheeler) made a nice pass and I just tried to bury it.”

“I pride myself on doing everything both ways, and unfortunately I was on the wrong side of guys tonight,” Robertson said.

Adam Lowry had a goal and an assist for Winnipeg. Wheeler and Dylan DeMelo had two assists each. Cole Perfetti, Jansen Harkins and Kyle Connor also scored for the Jets, who never trailed.

A game-opening flurry led to four goals in the first 7:47 of play and an early 2-2 tie. That flurry followed Wednesday's game, when Dallas rallied from a 4-1 deficit by scoring five times in the final 9:45.

Perfetti put in a backhand for the first goal 1:32 into the game, and Harkins scored at 5:48 for a 2-1 lead and his first goal in six games since his recall from the AHL’s Manitoba Moose.

The Stars nearly tied the game again on a power play with 12 minutes to play. Denis Gurianov sent a shot from the right faceoff circle off the left goalpost, and Hellebuyck then stopped Tyler Seguin's stick attempt with the rebound in the blue paint.

Robertson's tying goal survived a situation-room challenge that ruled Morrisey had run into Hellebuyck and there was no contact with a Dallas player.

Winnipeg had won a challenge at 5:22 of the second period after Robertson put a shot from the right faceoff circle past Hellebuyck. The initial ruling was a goal, but replay showed that before Robertson’s shot the puck hit the net behind the goal.

Robertson broke the Stars' 28-year-old record for the longest points streak. Dave Gagner had set the record in 1993-94. His son, Jets center Sam Gagner, witnessed the changing of the guard. The franchise record is 20 by Brian Bellows in 1985-86, when it was the Minnesota North Stars. ... Benn’s power-play goal kept the Stars as the NHL’s No. 1 team on the power play at home. In all games, the Dallas power play trails only Colorado. ... The Jets were guests in a luxury suite at AT&T Stadium on Thursday to see the Dallas Cowboys defeat the New York Giants.

In the first period, the video board showed Bowness, the Stars’ head coach for the previous two seasons, including a trip to the Stanley Cup finals in 2020-21. Bowness gave the cheering crowd a thumbs-up. He said, “My only disappointment was going to the finals in the bubble in Edmonton and not having our fans there.”

Jets: Finish a three-game trip at Chicago on Sunday

Stars: Have a back-to-back at Colorado on Saturday, the first in a two-game trip.