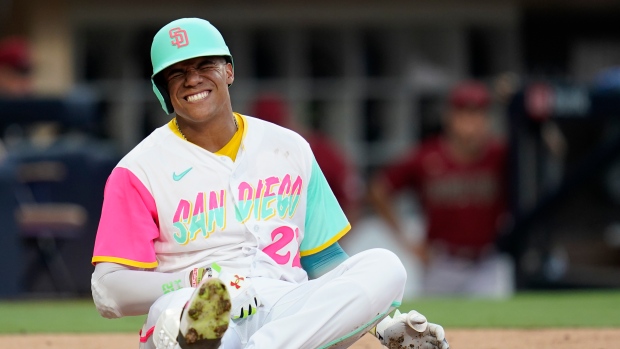 Juan Soto was hit by a pitch in the third inning of the game between the San Diego Padres and Arizona Diamondbacks, and left the game two innings later as a result of a right shoulder contusion on Wednesday.

Manager Bob Melvin disclosed the injury after the series finale in San Diego but said he thinks Soto should be ready when the Padres open a key series against the Los Angeles Dodgers on Friday.

The right fielder was struck high on the shoulder and went down for a moment, but was helped up by training staff and eventually took first base.

Trent Grisham replaced Soto in right field at the beginning of the fifth inning.

Soto was acquired by the Padres at the trade deadline in August in what can be described as one of the biggest trades in MLB history.

In 28 games with San Diego, the native of the Dominican Republic has hit .235 with three home runs and six runs batted in across 125 plate appearances.

The Padres defeated the Diamondbacks 6-3.