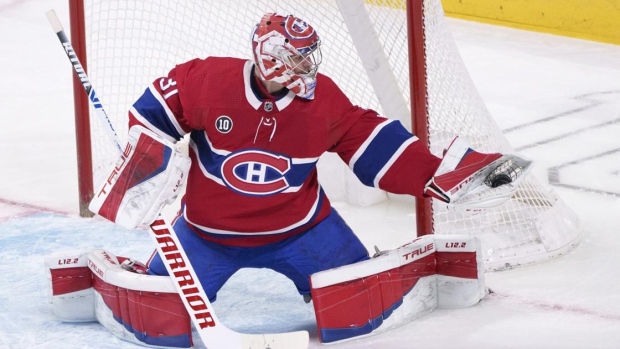 On the heels of the deal to acquire Sean Monahan from the Calgary Flames, questions about the team's salary cap arose for the Montreal Canadiens - which general manager Kent Hughes addressed on Thursday.

According to TSN Hockey Insider John Lu, no deals are imminent to create extra cap space after acquiring Monahan and his $6.375 million cap hit.

#Habs Hughes says no deals are imminent to create extra cap space. The ability to fit Monahan under the cap will depend on Price’s situation. Hughes says news is “discouraging” — PRP shot did not help & Price is not expected to start the season. @TSN_Edge

Instead, it is increasingly likely that future Hall-of-Fame goaltender Carey Price will not play this season, after a platelet-rich plasma (PRP) injection in his injured knee did not produce positive results.

Price originally had surgery to repair a torn meniscus in July of 2021, and was initially given a 10-12 week recovery period - but further swelling was detected in April of this year, causing concern for his health in the upcoming season.

According to Hughes, there is not a very good chance Price plays this season at all, given the current state of his rehabilitation.

#Habs Hughes added that Price may not be able to play this season as a path to return through rehab does not appear likely. @TSN_Edge

Current cap space projections have the Canadiens over the limit by just over $6 million, which would necessitate another contract being moved. Placing Price, who carries a $10.5 million cap hit this season, on LTIR would alleviate that problem substantially.