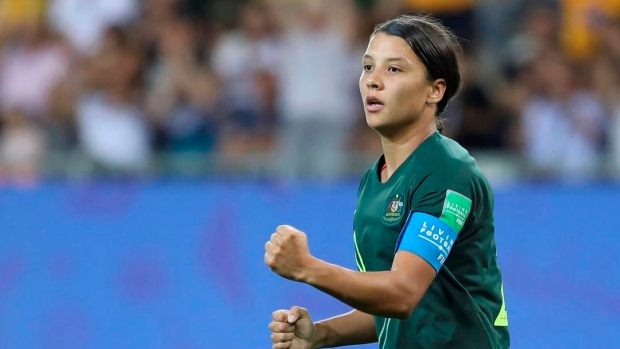 BRISBANE, Australia (AP) — Chelsea striker Sam Kerr and Manchester City defender Alanna Kennedy have been recalled to Australia’s squad for two matches against Olympic champion Canada in September that will kick off the Matildas’ final phase of preparations for a World Cup on home soil next year.

Kerr, Kennedy and Arsenal pair Steph Catley and Caitlin Foord are among the senior, Europe-based players included in the 23-player Matildas squad after being rested for games against Spain and Portugal in June.

Kerr has scored 59 goals in 110 games for Australia and is one of the undisputed stars in the global game.

Veteran striker Kyah Simon wasn't considered for selection for the games against Canada in Brisbane on Sept. 3 and Sydney on Sept. 6 as she continues recovering from an Achilles injury.

“I’m really, really excited to finally get the team back together again. Then playing the Olympic champions Canada … its going to be huge, massive games for us,” Matildas head coach Tony Gustavsson said. "There is an excitement around the group of players selected about the next 11 months of our work together ahead of a home" World Cup.

Canada beat Sweden in the Olympic final in Tokyo last year and has qualified for the World Cup after finishing runner-up to the U.S. women's team at the continental championships.

Gustavsson will have his top squad in camp together for the first time since April and said he “wanted to draw a line in the sand after 18 months” of developing a bigger talent pool by exposing younger, fringe players to international competition.

Gustavsson said 17 rookies had been given debuts for the Matildas across 18 months, significantly more than the average of about 2 per year across the previous decade.

“We’ve tried to catch up. We’ve shortcut the pathways for some players, used the senior national team as a development platform, almost,” he said. “Now, we narrow down the focus on the core group of players ... (a) smaller talent pool just to focus on the World Cup.”