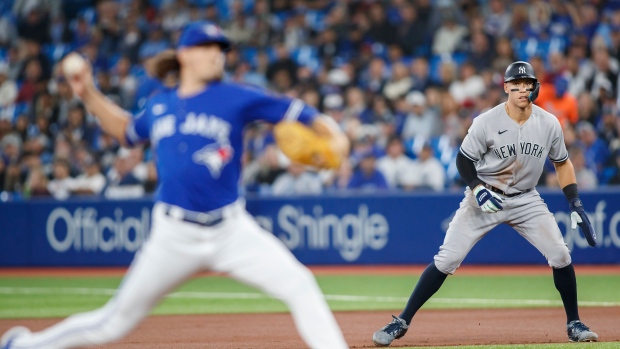 Toronto Blue Jays pitcher Kevin Gausman was not a fan of having to pitch Aaron Judge unique baseballs in the New York Yankees slugger's chase for 61 home runs.

Prior to each Judge at-bat, umpires are given new balls with individual markings to verify the ball that will tie Roger Maris' Yankees franchise and American League record of 61.

"Why does he need a different baseball? Like, if we're writing something on it beforehand, I think he's gonna get the baseball no matter what, right? I know why they're doing it. But, you know, kind of weird," Gausman told reporters after the Blue Jays' 3-2 win on Monday night.

Gausman made it clear the balls have no different feel or quality to them -- he checked right away -- but "it's just different."

I can see how that would be disruptive for a pitcher, tbh.

Judge batted leadoff in Monday's game, facing Gausman three times. He had a single, a strikeout and a walk in his second at-bat. He also struck out against relief pitcher Yimi Garcia and was walked again in the 10th inning.

Gausman, who noted the balls did not have a different feel to them, took pride in not allowing the historic home run.

"I don't want to be the answer to a trivia question," he said.

Judge has gone six straight games without a home run after hitting three over the span of two games on Sept. 18 and 20.