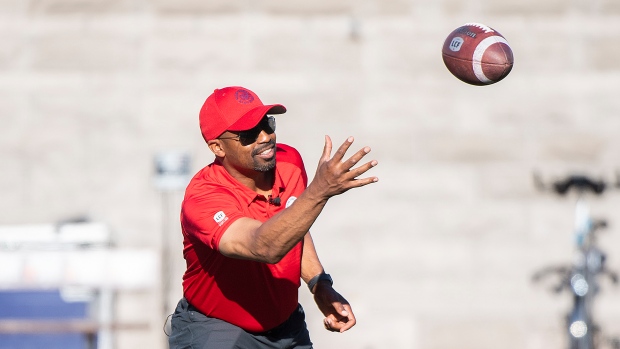 Khari Jones, the former head coach of the Montreal Alouettes, is headed to the Ottawa Redblacks where he'll work under newly named head coach Bob Dyce as the team's offensive coordinator, according to multiple sources.

Earlier Friday, TSN CFL Insider Dave Naylor reported that Jones was likely headed to Ottawa with Tim Baines of the Ottawa Sun later confirming that the two sides had an agreement in principle.

The @sskroughriders had reached-out to Khari Jones but sources say he is likely bound for @REDBLACKS to become OC under Bob Dyce, with whom he worked in Sask in ‘12 and ‘13. #CFL.

Hearing the #Redblacks have an agreement in principle for Khari Jones to be their offensive co-ordinator. #CFL

Jones compiled an 18-18 record in just over two seasons as Montreal's head coach before he was fired following an 1-3 start to the 2022 campaign. He led the Als to back-to-back appearances in the East Semifinal in 2019 and 2021.

The American joined the Hamilton Tiger-Cats as a football operations consultant in mid-July.

Naylor notes that the Saskatchewan Roughriders had also reached out to Jones, but the 51-year-old was bound for the nation's capital.

Obviously the @sskroughriders OC role is complicated by the fact the head coach is entering the final year of his deal. That’s a tricky dynamic to get around.#CFL #Riders

The Als finished with a 9-9 record this season before losing to the Toronto Argonauts in the East Semifinal while the Roughriders missed the postseason after going 6-12.