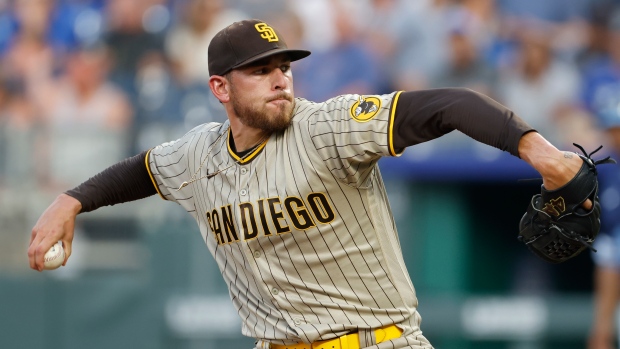 Wil Myers and Jake Cronenworth also homered for San Diego in the franchise’s first trip to Kansas City since 2002. Myers finished with three hits and three RBIs, and José Azocar had a career-high four hits.

“We certainly have the ability to (score runs),” manager Bob Melvin said. “It’s important for us to have a good game like this but to follow it up.”

Kim hit an RBI single in the sixth, a two-run double in San Diego’s four-run seventh and a two-run shot in the ninth.

Robert Suarez (4-1) got four outs for the win in relief of Joe Musgrove.

“Wherever he’s coming in now he’s coming in with guys on base,” Melvin said of the importance of Suarez’s outing. “He’s pitching one-plus. He’s really coming into his own at the right time for us.”

Fighting for positioning in the NL wild-card standings, San Diego scored three runs or fewer in its previous six games. But it had no trouble scoring against Kansas City.

The first six runs for the Padres scored with two outs.

“Scoring with two outs is big,” Myers said. “We haven’t been scoring a ton in general lately. Two-out knocks are great.”

Myers hit a two-run double in San Diego’s three-run first. Jurickson Profar drove in Azocar with a two-out double in the second. Myers and Cronenworth hit back-to-back homers in the third.

Kansas City scored its first run on Perez’s RBI single in the third, and then added four more in the fourth. Pratto had the big blow, a two-run shot to right-center against Musgrove.

“Nothing comes easy for us,” Melvin said. “We have a game where we’re ahead 6-0 and we have Joe on the mound. You think that’s about as easy as it can gets. Suarez came in and did a great job and we ended up scoring some runs after that.

“You feel good all the way around. We need to pick up a guy like Joe when he doesn’t have his best stuff.”

San Diego responded with run-scoring singles for Kim in the sixth and Cronenworth in the seventh.

Musgrove was charged with five runs — two earned — and eight hits in 3 2/3 innings.

“I struggled to get the swing and miss,” Musgrove said. “In the fourth I made some good pitches and wasn’t able to get the misses I wanted. I was able to get the ground balls, but they found some holes. The mistake pitches over the middle were hit hard. Poor execution.”

Kim hit his seventh homer in the ninth against utilityman Hunter Dozier.

Padres OF Juan Soto was not in the starting lineup after missing the last two games with back tightness. Melvin said it was possible that Soto could pinch-hit based on how he felt after batting practice. “He looks like he’s feeling a lot better,” Melvin said. ... RHP Pierce Johnson began a rehab assignment with El Paso. He has been on the injured list since April 22 with right elbow tendinitis.