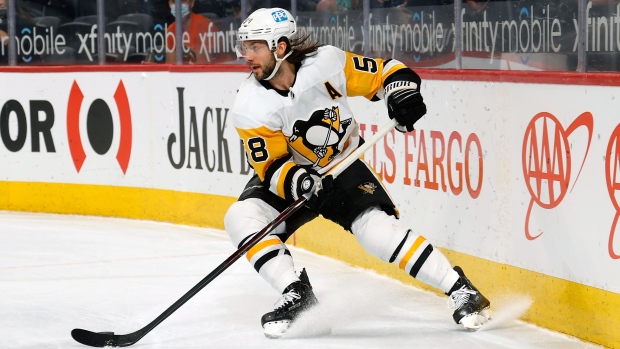 Kris Letang is out indefinitely after suffering a stroke on Monday.

Letang is not experiencing any lasting effects of the stroke and will continue to undergo a series of tests over the next week. https://t.co/dQeKuhrBH2

Letang 35, is not experiencing any lasting effects of the stroke and will continue to undergo tests over the next week. There will be no further updates on Letang's condition untill all testing has been completed and a medical plan is in place. Letang's career is not believed to be in jeopardy.

"Kris reported symptoms to the training staff on Monday and was immediately taken to the hospital for testing," said Hextall. "The test results were shocking to hear, but we are grateful that Kris is doing well. We are thankful to the medical staff and the physicians at UMPC. He is a warrior on the ice, but first and foremost, he is a son, father, husband and friend. His health is our number one priority."

The Montreal, Que. native missed over two months of the 2014 season due to a stroke. At the time, testing reveal that he was born with a very small hole in the wall of his heart. He has played 543 regular season games and 69 playoff games since his initial stroke.

"I am fortunate to know my body well enough to recognize when something isn't right," said Letang. "While it is difficult to navigate this issue publicly, I am hopeful it can raise awareness. It is important for me that my teammates, family and the fans know that I am okay. I am optimistic that I will be back on the ice soon."

Letang has one goal and 12 points in 21 games this season. In 17 seasons, al with the Penguins, Letang has scored 145 goals and added 517 assists in 962 regular season games. He is the franchise's all time leader among defencemen in regular season and playoff games played, goals, assists and points.