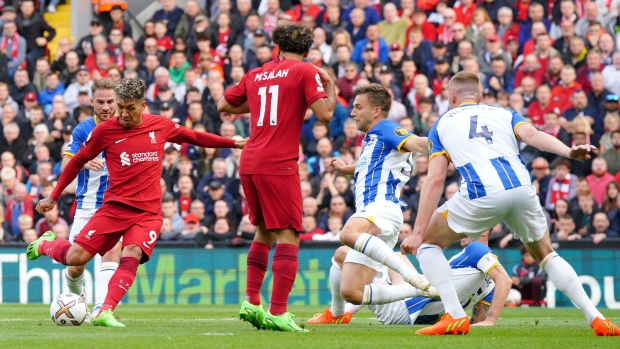 LIVERPOOL, England (AP) — Leandro Trossard completed his hat trick with an 83rd-minute equalizer to earn Brighton a 3-3 draw at Liverpool in the Premier League on Saturday, marking an entertaining start to Roberto De Zerbi’s time in charge of the team from England’s south coast.

De Zerbi certainly put his stamp on Brighton after his arrival as Graham Potter’s replacement, setting the team up in a bold 3-2-4-1 formation at times at Anfield and taking risks in possession against one of the world’s best pressing sides.

It yielded some early benefits — Trossard scored well-worked goals off left-footed shots in the fourth and 17th minutes — before Liverpool got to grips with Brighton’s playing style and mounted a fightback.

Roberto Firmino scored either side of halftime and Liverpool went ahead off a hint of fortune, when Robert Sanchez miscued his punch from Trent Alexander-Arnold’s corner and saw the ball rebound off his own defender, Adam Webster, and into the net in the 63rd.

However, Brighton claimed a point — perhaps the least the team deserved from its adventurous play — when substitute Kaoru Mitoma crossed from the left, Virgil van Dijk missed a clearance and Trossard steered home a finish that goalkeeper Alisson Becker could only palm onto the crossbar and into the net.

Liverpool has won just two of its first seven matches in the league.