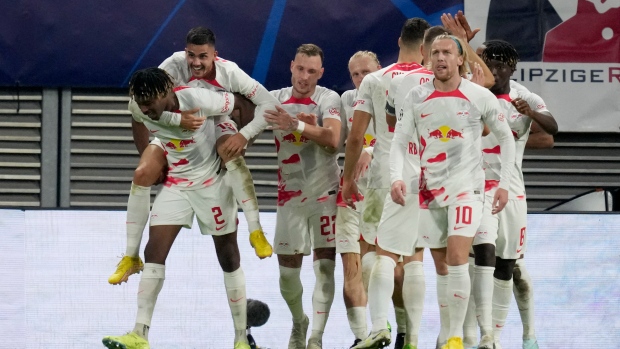 LEIPZIG, Germany (AP) — Leipzig earned its first win of the Champions League season by beating Celtic 3-1 on Wednesday thanks to two late goals from André Silva and a defensive error from visiting goalkeeper Joe Hart.

The outstanding Christopher Nkunku also scored as Leipzig finally got off the mark in Group F after losses to Shakhtar Donetsk and Real Madrid. But the win came at a cost as influential goalkeeper Péter Gulácsi had to be carried off early with an apparent right knee injury. Janis Blaswich replaced him for his Champions League debut.

Nkunku had a goal ruled out through VAR for offside shortly afterward, but the French player showed his class in the 27th when he went past Hart and finished from a narrow angle.

Kyogo Furuhashi had just gone close for the visitors, who suffered a further blow when captain Callum McGregor had to go off injured in the 37th.

Portuguese winger Jota equalized in the 47th when Furuhashi sent him through for a one-on-one with Blaswich. Jota sidefooted a low shot inside the far post for his first Champions League goal.

Dominik Szoboszlai struck the post in response, then thought he scored with a shot from 20 meters (yards) inside the far post. But VAR again ruled it out as André Silva had blocked Hart’s view.

The Celtic goalkeeper then gifted Leipzig its second goal when when he passed straight to Szoboszlai, who teed up Silva to put the host ahead in the 64th.

Then Nkunku shone again with a brilliant ball for Mohamed Simakan to tee up Silva to seal the result in the 77th.

Celtic dropped to the bottom of Group F with one point.